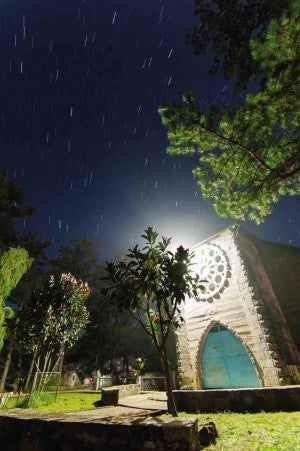 THE ST. MARY the Virgin Church in the tourist town of Sagada in Mt. Province remains an enduring symbol of the contribution of the Anglican church in the education of residents and the town’s development. RICHARD BALONGLONG

Beyond its famed limestone caves, picture-pretty rice terraces and other natural wonders, the upland resort town of Sagada in Mt. Province has another wonder—the top quality education of a more than century-old Anglican-founded school.

Despite challenges, St. Mary’s School has maintained its status as a center of excellence. The school sits within a donated 34-hectare property in Barangay (village) Poblacion in Sagada.

St. Mary’s School has pioneered what is called “student-centered learning,” an approach that underlies the educational philosophy of the Department of Education’s K to 12 (Kindergarten to Grade 12) basic education program.

Since it has been long ahead in this approach, it has become a regional training center for teachers on the K to 12 program.

Student-centered learning focuses on the interests of the students, rather than those of others involved in the educational process, like teachers and administrators.

That St. Mary’s has reached such stature as a demo school of quality education and

regional training center has prompted alumni to honor the man who started it all more than 100 years ago—Bishop Charles Henry Brent.

In 1901, three years after the Americans took over the country from the Spaniards in 1898, the American Episcopal Church sent Brent to lead a missionary district in the Philippines. Brent focused much of his work among the “marginalized non-Christian tribes” in the northern and southern parts of the colony.

To honor Brent, alumni of St. Mary’s will meet on Aug. 7-10 in Toronto, Canada, for a conference to honor the bishop’s legacy for northern Philippine tribes, says Andrew Bacdayan, a retired economics professor at Lamar University in Texas.

Bacdayan, who hails from Bangaan village in Sagada, enlisted as seventh grader of St. Mary’s in 1951 after finishing primary school at St. Matthew’s School in Bangaan, another Anglican school. That time, St. Mary’s was the only school in the Philippines offering seventh grade.

Now based in Texas, Bacdayan is the president and board chair of the St. Mary’s School of Sagada Alumni and Friends Foundation (SMSSAFF), which is organizing the Toronto meet.

Bacdayan says the group chose Toronto because it was where Brent was born in 1862. In 1887, Brent migrated to the United States, where he was ordained.

During his term as bishop from 1901 to 1917, Brent proved to be “a prodigious builder of churches, hospitals and schools,” Bacdayan says.

Bacdayan and other Igorot folk consider the establishment of St. Mary’s as “one of the high water marks” of Brent. Under his watch, the school was established by his fellow missionary, Rev. Fr. John Staunton in 1904.

“When Father Staunton began teaching typing, shorthand and mind training to Tomas Galgala (one of the students) in 1921, he started calling it the high school building,” writes Dr. William Henry Scott, referring to a two-story pine shingle-roofed building.

Scott first came to the Philippines in 1954 as a missionary to teach at St. Mary’s.

The current K to 12 program, Bacdayan says, has the same aim of equipping young people, as early as high school, with technical and proficiency skills which they can put to good use later, whether they end up getting a job after high school or pursuing college.

Many alumni credit the kind of high school education they got at St. Mary’s, which, they say, had fully prepared them for college.

“I found that I was much more prepared than most of my classmates, especially in math and English, when I entered the University of the Philippines’ College of Forestry in Los Baños, Laguna [province] in 1955,” Bacdayan says in an e-mail interview. “I ended up tutoring my dorm mates in math and English.”

He credits his math and English skills to his teachers at St. Mary’s. He particularly cites Scott, who “taught me a lot of stuff about English.”

Scott, a historian and scholar, made Bacdayan a staff member of the Sagada Postboy, the school paper, because news and feature writing or campus journalism was part of the school curriculum.

As early as then, Scott taught his students surveying. As a practicum, they started mapping Sagada.

“I didn’t have the slightest idea of what we were doing until I went to forestry school where surveying was taught. My training with Dr. Scott made the course easier,” Bacdayan says.

In 1962, the school placed ninth in national examinations administered to 1,500 public and private schools, an achievement the principal attributed to four factors: the excellence of the faculty, the entrance requirement of the seventh grade, the presence of a large library and the quality of sixth grade graduates from Sagada’s public schools, Scott writes.

Since its opening in 1912, St. Mary’s School has built a reputation for academic excellence that has become the envy of the region. But funding began to dry up in the 1990s when the missionary district, heavily subsidized by the mother church in the United States, became an independent diocese.

By 2000, St. Mary’s was on the verge of closing because, aside from funding problems, a nearby tuition-free secondary public high school was established.

The alumni who will be gathering in Toronto seek to sustain what Brent, Staunton and other pioneers started more than 100 years ago. They want to sustain the kind of quality education they felt they owed the school, and look for ways to keep it afloat.

Led by alumni like the late businessman Frank Longid and Rufino Bomasang, a mining engineer and former Department of Energy secretary, the school was reorganized as a nonprofit corporation managed and operated independently from the Philippine Episcopal Church.

In 2005, one of the school’s early nonalumni benefactors, philanthropist and educator, Dr. Dennis Faustino, was hired by the board of trustees to run the school.

The SMSSAFF conference aims to tap its alumni to help in a fund drive for St. Mary’s upkeep. Since 2005, the school has been maintaining an average of 200 students.

A nonprofit organization incorporated in New Jersey in 2005 by St. Mary’s alumni in the United States and Canada, the SMSSAFF members meet every two years to renew their bonds and raise funds for the school.

Since 2005, the group has raised almost $250,000. This amount has been used to augment faculty salaries, provide scholarships, renovate classrooms and laboratory equipment, buy computers and build a gymnasium, Bacdayan says.

Read Next
Salceda: ‘God took care’ of Albay forest fire
EDITORS' PICK
Smart offers wireless fiber-like speeds to Filipino homes with country’s first 5G Prepaid Home WiFi
Pharmally’s Twinkle Dargani in tears when asked about missing documents
Corruption in PH: Where presidential aspirants stand
Two more sites at Robinsons Malls for temporary offsite passport services
BIR audits tax compliance of Pharmally
Holidays made best with Acer’s ‘Holidays at Home’ raffle promo
MOST READ
Roque ‘hurt’ after presidential aspirant did not adopt him in Senate lineup
Gordon to Duterte: ‘How dare you ask for Filipinos’ vote when you failed them?’
Pharmally’s Twinkle Dargani in tears when asked about missing documents
‘Move on, pahinga na:’ Moreno to quit politics if not elected president
Don't miss out on the latest news and information.