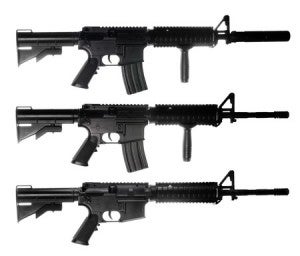 MANILA, Philippines – After an armored personnel carrier traversing the busy Epifanio delos Santos Avenue caused jitters recently, the Philippine Army said Monday that a new sight would emerge and be an “inspiring” moment for soldiers.

Lieutenant Colonel Noel Detoyato, Philippine Army spokesman, said the arrival of 27,300 M4 rifles for the Philippine Army on Thursday would be a sight to see once the soldiers receive their new equipment.

“It’s beautiful, it’s very inspiring, it would give you shivers because you know that it is brand new,” Detoyato said. “You know, our soldiers are not rich, and for them to receive new equipment is a welcome development.”

Last Thursday morning, an APC was spotted along the southbound lane near Nepa Q-Mart on Edsa, Quezon City.

It happened amid rumors of a destabilization plot against the Aquino administration.

Earlier reports said that the APC was used to escort the trucks that were delivering “critical materials.”

Now it can be told: Those “critical materials” were in the form of the M4 rifles, Detoyato said.

“It’s just some time ago that there were coup fears because of the movement,” Detoyato said. “There was movement because they picked up the rifles and the APC’s were there to escort them.”

Detoyato added that the rifles arrived in South Harbor on Thursday aboard one ship inside 19 containers and are now inside Camp Aguinaldo for inspection.

“Tomorrow (Tuesday) would be the technical inspection of the rifles,” Detoyato said. “The distribution though does not have a date yet.”

Read Next
US missionary with Ebola leaving Liberia Tuesday
EDITORS' PICK
NUSTAR Resort and Casino: Cebu’s next lifestyle and leisure gem
EDITORIAL: Solo parents deserve more
Enjoy the best of city living at SMDC’s Fame Residences
Step up your vlog game with vivo’s newest smartphone
No more need to quarantine foreign arrivals if fully vaxxed
Guanzon: Senator behind delay in Marcos DQ case
MOST READ
Guanzon to Bongbong Marcos camp: How do you know I had ‘minority opinion’ on DQ cases?
Guanzon gives Ferolino until Monday to release reso on Bongbong Marcos’ DQ cases, or else
Guanzon: Senator behind delay in Marcos DQ case
Marcos a no-show in another GMA interview
Don't miss out on the latest news and information.