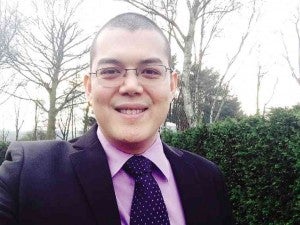 FROM the United Kingdom, Pozon will fly to the United States for a three-week program.

A Filipino lawyer currently on a postgraduate scholarship in the United Kingdom has been selected to participate in the US government’s premier professional exchange program.

Ira Pozon, legal counsel to Vice President Jejomar C. Binay, “will attend the IVLP (International Visitor Leadership Program) later in 2014 upon the completion of his academic responsibilities at Nottingham,” said the University of Nottingham, which announced the Filipino’s selection.

Pozon is currently pursuing a Master of Laws degree in international commercial law at the prestigious British school under the British Chevening Scholarship program.

He was among 11 Filipinos chosen as Chevening scholars last year.

Pozon will fly to the United States after completing his academic work in the United Kingdom for a three-week program under the US Bureau of Educational and Cultural Affairs’  IVLP, set on Sept. 13 to Oct. 4.

Pozon’s selection for the US exchange program followed closely his appointment in February as Regional Chevening Ambassador for the Midlands (central England). Selected through a “competitive” process, the Chevening ambassador participates in social and professional networking activities in one’s assigned region.

In announcing Pozon’s US grant, the university underscored the prestige of IVLP as the US State Department’s premier professional exchange program that counts four British prime ministers and other world leaders among its alumni.

Asked to comment via e-mail, Pozon said: “It is an absolute honor and privilege to be selected to participate in the International Visitor Leadership Program…. The program has become highly prestigious and features a myriad of notable alumni, including 335 current and former world leaders, heads of government and chiefs of state.”

On leave from his post at the Office of the Vice President, he said the “knowledge and experience in policy, leadership and international and foreign relations I will get … in IVLP will significantly enhance my usefulness in public service.”

Pozon is head of the Special Concerns Unit and deputy head of the Office for Foreign Affairs at Binay’s office. He also taught law and has published articles and legal opinions in both local and international law journals, including The Jurist of the University of Pittsburgh School of Law in Pennsylvania, and in the Huffington Post.

He has a dual Juris Doctor-MBA (Master in Business Administration) degree under a joint program of De La Salle University and Far Eastern University.

Before IVLP, however, Pozon will have to fulfill his duties as a Chevening ambassador, including “organizing social events and opportunities for professional networking and development for Chevening scholars studying at universities throughout the Midlands region.”