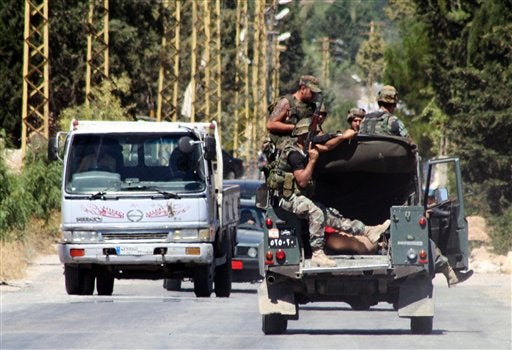 Lebanese soldiers ride in the back of an army vehicle with detained suspected militants in the Lebanese town of Arsal, a primarily Sunni Muslim town near the Syrian border in eastern Lebanon, Sunday, Aug 3, 2014. AP

LABWEH, Lebanon — Thousands of Lebanese civilians and Syrian refugees were fleeing in packed cars and pickup trucks on Monday from an eastern border town that was overrun by militants from neighboring Syria.

The exodus came as Lebanese troops sent reinforcements in their struggle to purge Arsal of the Syrian extremists.

The clashes are the most serious spillover of violence from Syria’s civil war into Lebanon, compounding fears that tiny Lebanon is fast becoming a new front in its neighbor’s conflict, now in its third year.

The three-day fighting in Arsal, an overwhelmingly Sunni town surrounded by Shiite villages, could worsen already-brewing sectarian tensions in Lebanon. The army has vowed to expel the militants from the town — an ambitious task considering the porous nature of the Syria-Lebanese border and the political and sectarian divisions within Lebanon.

So far, at least 11 Lebanese troops have been killed and 13 soldiers are missing in the Arsal clashes, which erupted Saturday after Syrian militants made a cross-border raid and overran army positions in the area.

Residents fleeing Arsal said they made use of a relative lull between midnight and Monday morning to pack up and leave. Heavy fighting then erupted and black smoke could be seen billowing over the town, which the Lebanese army sealed off to media.

Cracks of heavy gunfire and the thud of shells could be heard from a distance as tanks pounded rebel positions in and around Arsal. A dozen Lebanese army flatbed trucks were seen carrying tanks toward the outskirts of Arsal on Monday.

Among those fleeing was Aziza Rayed, in her 60s, who said her family was going to the nearby border town of Qaa.

“We are leaving to take these children to a safer place,” she said, her children and grandchildren in the back of a pickup truck.

Syrian refugees who had earlier fled the war at home for Arsal’s safety were among those fleeing Monday. One of them, Fatmeh Meshref from the Syrian central city of Homs, said she and her husband and five children were terrified.

“Our children were screaming and we had no place to hide,” she said.

The Syrian incursion and capture of Arsal came after the Lebanese army said its troops had detained Syrian Imad Ahmad Jomaa, who identified himself as a member of the al-Qaida-linked Nusra Front — one of the most powerful rebel groups fighting against Syrian President Bashar Assad’s troops.

The state-run National News Agency reported on Saturday that Jomaa was detained as he was being brought to a hospital in Lebanon after being wounded while fighting Syrian troops.

Lebanese army chief Gen. Jean Kahwaji said on Sunday that the Syrian fighters in Arsal belonged to extremist Sunni groups, without naming them. He said the fighting was “more serious than what some people imagine” and called on Lebanese politicians to show unequivocal support for the military.