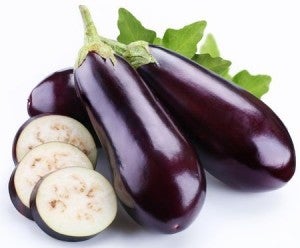 MANILA, Philippines–A group of organic movers, farmers and traders on Sunday staged a protest against the field trials of genetically modified (GMO) eggplants and other GMO food products during their market fair in Makati City.

Led by Mara Pardo de Tavera, organic food advocate and owner of organic market pioneer Mara’s Organic Market, about 200 organic farmers and traders at the Legazpi Sunday Market asked President Aquino to order the Department of Agriculture and other government research institutions to abandon plans of field-testing the BT eggplant, which is believed to contain toxins that can cause cancer and skin diseases to humans.

This potential move by the President, according to the farmers and traders, will “protect and safeguard” the health of the Filipinos.

“I believe that President Aquino has a mandate under the Constitution which specifically calls on him to protect the Filipino people against health threats,” De Tavera said, adding that she was confused as to why the government, through the International Rice Research Institute and other research institutions, encourages the planting of BT eggplants.

De Tavera and other organic food advocates, who were wearing custom T-shirts with the words “No to Toxic Talong,” held a short education session inside the market fair to explain to the buyers and to the public the consequences of allowing GMO eggplants to be field-tested in the country.

The 60-year-old organic food advocate said that these GMO eggplants can cause skin allergies, encephalitis, immune deficiency and even birth defects.

“We just want the people to know that there are still safer food choices available for them which cannot cause health problems and complications,” De Tavera said.

Joseph Javier, an industrial nurse in Saudi Arabia and a stall owner at the Sunday market fair, told the Inquirer that he started feeling pain on the fingers of his right hand and noticed a painful lump after he consumed a large variety of eggplant sold at a local market a month ago.

“Until now, I can still feel that it is painful,” Javier said while showing a swollen part of his thumb. He admitted that he has not yet visited his doctor but noted that he strongly believes it was related to his eggplant consumption.

To avoid this kind of health problem, De Tavera advised fellow Filipinos to slowly shift to organic food. Although a bit pricier, she said that these naturally grown food products are environment- and health- friendly. The group estimates that organic products cost about 30 to 50 percent higher than the regular variety available in the market.

Read Next
Small plane crashes into Brazilian house, kills 5
EDITORS' PICK
vivo brings to the Philippines a powerful smartphone with a slimmer body, the vivo Y02s for only PHP 6,499
Palace: Biggest supermarkets in PH commit to sell sugar at P70 per kilo
What to watch out for when selecting a video surveillance solution
Heads may roll at BOC, says Palace if sugar smugglers are allowed to use recycled import permits
House energy committee chair Arroyo bats for cheap electricity
DOH reports increase in daily COVID-19 deaths, mostly unvaxxed
MOST READ
Metro Manila’s No. 1 wanted man arrested, says NCRPO
DepEd to give teachers P5K cash allowance within first week of classes
Jordan Clarkson arrives in Manila to bolster Gilas Pilipinas
Brian Poe-Llamanzares receives his PhD in Public Administration
Don't miss out on the latest news and information.