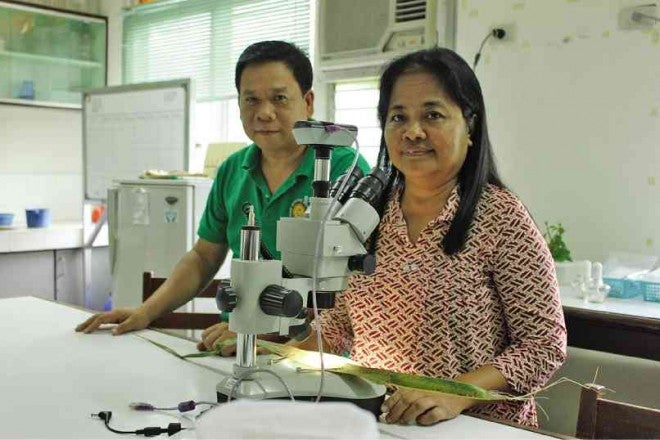 MARIO and Marcela Navasero, University of the Philippines Los Baños researchers, continue to devote time and effort to the study of insects and pests for the benefit of poor farmers. MARICAR CINCO/INQUIRER SOUTHERN LUZON

LOS BAÑOS, Laguna—She would refer to him as her “greatest assistant” while he would call her his best “research collaborator.”

Their most recent work together was to discover a parasitoid, a wasp-like insect and a “natural enemy” of the coconut scale insect or “cocolisap,” which has infested hundreds of hectares of coconut farms in southern Luzon.

The parasitoid measures less than

1 millimeter in length. Under the microscope, it looks like a wasp that punctures the scale body of cocolisap and deposits its eggs into the host insect. The parasitoid’s larvae feed on the cocolisap’s internal tissues until the host dies. The process takes about 25 days.

The discovery of a natural enemy to cocolisap was formally announced in July in a forum called by Save the Coconut Movement, a group of coconut industry stakeholders, where the couple discussed their findings.

To date, the Navasero couple has visited cocolisap-infested farms in 19 towns and cities in the provinces of Laguna, Quezon, Batangas and Cavite, and continues to do so to further their research.

The University of the Philippines Los Baños (UPLB) in July also gave P150,000 to the couple for further documentation of the parasitoid.

“There are now groups of farmers and scientists that are planning to mass-rear the parasitoid,” Mario said.

Mario and Marcela, both 54, are not only laboratory partners, as they, too, have been a married couple for almost three decades and parents to five boys.

They met at UPLB, where both took a degree in agriculture specializing in entomology.

“We used to date in Mt. Makiling while collecting samples and spend nights with our study group reviewing for exams,” Mario recalled. Marcela remembered how her would-be husband  tirelessly collected her insect samples for their class.

Marcela grew up in a farm in Tarlac City, Tarlac province, while Mario was also a farmer’s son raised in Los Baños.

After college, Marcela was immediately hired as a researcher at the Plant Pest Clinic, a research unit in UPLB, and worked there for ten years. Mario, on the other hand, worked as a curator at UPLB’s Museum of Natural History for about four years.

Today, both are researchers at

Their careers as researchers did not start out smoothly. During the early years, a researcher’s salary was P2,500 per month, Mario recalled. 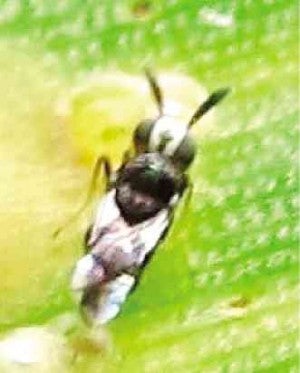 THE PARASITOID Comperiella sp. (Encyrtidae, Hymenoptera) looks like a wasp that punctures the scale body of “cocolisap” and deposits its eggs into the host insect. PHOTO COURTESY OF MARIO NAVASERO

“The children were growing up and we had loans to pay here and there. There were times we were late in paying [the children’s] tuition,” he said.

To make ends meet, Mario took research projects under the Fertilizer and Pesticide Authority. The couple used to also rent a 1,500-square-meter farm here, where they grew ornamental flowers and sold them to earn extra.

“Many researchers, after getting the training they need, opt for the greener pasture, so to speak,” Marcela said.

But despite offers for higher-paying jobs in private chemical companies, the couple chose to stay at UPLB.

“It feels different working for a private company than in the government. You know that working for the latter allows you to do something for the benefit of the people,” said Mario, who was a student activist during martial law.

“It may also have something to do with us coming from a family of farmers because our sentiments are always the same as that of the farmers,” he added.

Marcela specializes in biological control and pest biology. Among her pioneering works are the study of predatory mites and Black Earwigs.

Mario, on the other hand, specializes in insect taxonomy, biological control and pest management, specifically of Philippine psyllids, or jumping plant-lice, which he started in 2000.

To date, Marcela has 32 publications in science journals while Mario has 29.

The couple and 15 other researchers were conferred the level Scientist 1 under the Scientific Career System of the Department of Science and Technology in March 2013. The rank is equivalent to a government salary Grade 26 or that of a university professor.

But research funding wasn’t always available, so  there were instances when the couple had to shell out their own money to fund farm visits. They also had to squeeze them into their regular work schedules, so  there were times when they would bring home insect samples and work on them in between their time with family.

“It’s not very easy to get funding. For one, there’s politics [between funding agencies],” Mario said.

Even so, the couple sees every pest outbreak as an “opportunity, in the sense that there’s a chance to do research,” he said.

From around 40 researchers, the NCPC has just 12 left. “We are really lacking in entomologists and pathologists,” Mario lamented.

But the couple does not see this as a reason to leave. “If you have passion for what you do, you just stay on that path,” he said.