Gas prices down; diesel, kerosene up 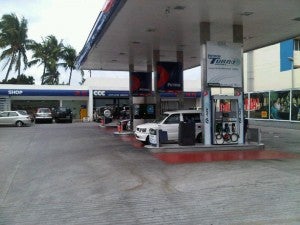 Petron, the country’s top oil player, and Shell have said that they will drop gasoline prices by P0.75 per liter at the pump while diesel and kerosene prices are up by P0.35/L and P0.25/L, respectively. Petron said the changes would take effect by 12:01 a.m., Monday, August 4.

“These (price adjustments) reflect movements in the international oil market,” Petron said. It was the fourth weekly decline for gasoline.

At the same time, PTT Philippines has made the same price adjustments for gasoline and diesel only as it does not carry kerosene products.

Phoenix Petroleum, another independent oil player, has announced it will decrease the price of its gasoline products by P0.75/L and increase that of diesel by P0.35/L come 6 a.m. instead of 12:01 a.m. on Monday.

Other oil firms, including another top player, Shell, have not announced price movements, as of this writing, but are expected to make similar adjustments since nearly all the fuel products in the country are imported and thus vulnerable to international prices movements.

Including the price movements this week, the year-to-date total adjustments stand at a net decrease of P2.55 per liter for diesel and about P1.50 per liter for gasoline.

Short term supply concerns could spark price hikes now and then over the next few months as political and/or sectarian violence blow over oil producing countries in the Middle East.

Analysts say more volatility is expected in the global oil market in coming years as new production, including from unconventional sources in North America, pressure price downward. Some forecasts have been as pessimistic as $70 per barrel for Brent crude oil in 2020, down from the current price of over $100 per barrel.