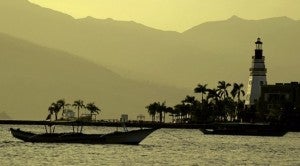 Feeder vessels are small ships that transfer cargo or shipping containers from one sea vessel to a bigger ship that carry freight for a longer haul.

Garcia said Vale was considered the world’s largest producer of iron ore and had been using Subic Bay as a transshipment point for two years now.

“The iron ore was being brought here from Brazil before it got shipped to China, which consumes maybe 60 percent of the world’s iron ore requirement for their steel companies,” Garcia said on Wednesday.

He said the spillage was first reported on July 25, prompting him to send a team from the SBMA’s ecology center and seaport department.

“The iron ore left on the deck was washed aside by strong rains. This has caused discoloration in the water,” Garcia said.

“Iron ore is not a hazardous material and it does not react to the environment. That minimal spillage has no effect at all,” he said.

He said the firm also doused the ore with water before the cargo was transferred from one vessel to another to prevent the spread of the more harmful iron ore dust.

Ronnie Yambao, SBMA acting deputy administrator for business development, said Vale assured the agency that its floating terminal stations were equipped with rainwater collection tanks that should reduce the volume of iron ore spillage during the monsoon season.

But the SBMA directed Vale to refrain from transferring iron ore from its mother ship to the feeder vessels during heavy rains as a precaution, he said.

Some residents and local officials in Olongapo City have turned to social media to express their apprehension over the environmental impact of iron ore on Subic’s waterways.

“Subic Bay is no longer safe. The water is polluted by industrialization [and] ship building. Environmental protection was ignored because it’s all about money,” read a post on Facebook page Stop Vale Ore Operations in Subic Bay Now.