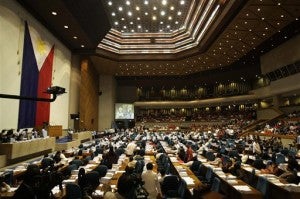 PANGASINAN, Philippines—Akbayan Rep. Ibarra Gutierrez III expressed confidence that the Freedom of Information (FOI) bill would be enacted into law within this year, especially after President Benigno Aquino III included the measure in the priority bills of his administration.

“The process is quite slow but it’s moving. Before our recess last June, our committee [on public information] had seven meetings, which is the most number of meetings in a technical working group on any bill that I attended,” said Gutierrez, one of the bill’s 20 authors.

“I think this is a reflection of the seriousness of the authors and even the house leadership to have this passed,” he said.

Gutierrez talked to reporters in Rosales town in Pangasinan province on Thursday on his way to a consultation in Umingan town.

“Now, with the specific endorsement of the President, I think 100 percent, this will pass. It’s a clear signal to the President’s allies, even those who are quite apprehensive, to support this [measure],” Gutierrez said.

He said a technical working group, where he belongs, is consolidating the FOI bill’s seven versions.

“But the [discussions on] the bill’s most contentious provision, which is the provision on exceptions, is about to be finished. Once this is through, another two or three meetings at most, the consolidated version is finished,” Gutierrez said.

“And I am very sure that if this is approved in the committee level, hopefully by August or September, this will already be scheduled in the plenary. So, we can pass it, hopefully, within the year. If not, surely, by next year,” he said.

Gutierrez admitted that he was disappointed when the President did not mention the FOI bill in his State of the Nation Address (Sona) on Monday.

“There were words circulating before the Sona that he was going mention it, that’s why we were very excited. We—all the authors—had planned to stand up and clap loudly once the President mentions it,” Gutierrez said.

“But it was a missed moment. At least, two days after [he delivered the Sona], it was included in the list of priority bills,” he said.

Gutierrez said that among all the measures included in the list, FOI was the most prominent because all sectors were clamoring for its immediate passage.

“The FOI is our guarantee for accountability. I think one of the things that the President brought back when he assumed office in 2010 was transparency and the notion of accountability in the government,” Gutierrez said.

This means, he said, that government officials and employees can no longer do whatever they please without being accountable for their actions.

“And to me, the FOI is a very crucial tool to ensure that. The media and ordinary citizens can now go to the city hall or any government agency to ask for a copy of the budget or contracts of projects,” Gutierrez said.  Gabriel Cardinoza, Inquirer Northern Luzon

Coalition demands to hear Aquino on freedom of info bill