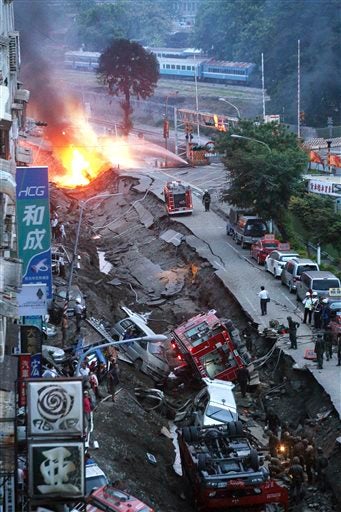 Vehicles are left lie in a destroyed street as part of the street is burning with flame following multiple explosions from an underground gas leak in Kaohsiung, Taiwan, early Friday, August 1. A massive gas leakage early Friday caused five explosions that killed scores of people and injured over 200 in the southern Taiwan port city of Kaohsiung. (AP Photo)

TAIWAN — At least 24 people were killed and 271 injured when several underground gas explosions ripped through Taiwan’s second-largest city, hurling concrete and cars through the air and blasting trenches in the streets, authorities said Friday, as a search for the cause began.

The series of explosions about midnight Thursday and early Friday struck a densely populated district where several petrochemical plans operate pipelines alongside the sewer system in Kaohsiung, a southwestern port with 2.8 million people.

Firefighters called to the neighborhood to investigate a gas leak were among the victims when the blasts went off several hours later, upending at least five red fire trucks amid the rubble of pavement and dirt.

Four firefighters were among the 24 dead, and 271 people were injured, the National Fire Agency said. The death toll could rise, because many of the seriously injured were still being treated, officials said.

“Last night around midnight, the house started shaking and I thought it was a huge earthquake, but when I opened the door, I saw white smoke all over and smelled gas,” said Chen Qing-tao, 38, who lives 10 buildings away from the main explosion site.

The fires were believed caused by a leak of propene, a petrochemical material not intended for public use, but the cause and source of the leak were not immediately clear, officials said.

The exploded gas line belongs to government-owned CPC Corp., which told The Associated Press it showed no signs of problems before the explosions. CPC officials at the scene Friday declined to offer information about reasons for the blasts.

Video from the TVBS broadcaster showed residents searching for victims in shattered storefronts and rescuers pulling injured people from the rubble of a road and placing them on stretchers while passersby helped other victims on a sidewalk. Broadcaster ETTV showed rows of large fires sending smoke into the night sky.

Chang Jia-juch, the director of the Central Disaster Emergency Operation Center, said the leaking gas was most likely to be propene. One of the fires, along a 10-meter stretch of gas line, is still on fire, the National Fire Agency says on its website.

The source of the leak was unknown. Chang said, however, that propene was not for public use, and that it was a petrochemical material.

The government’s disaster response center said Friday it was trying to prevent any knock-on gas explosions in the same place or nearby.

“In terms of what we can prevent, we’re afraid another explosion could happen, as there is that possibility,” said Hsu Lee-hao, an economics affairs ministry section chief staffing the disaster response center. “We’re afraid it could be in the same place or elsewhere.”

Most of the injured were people outside on the street, mostly hit by rubble blown toward them or crushed by cars sent flying in the blasts, a police officer at the scene said. Police and firefighters were burned while trying to control blazes.

Kaohsiung Mayor Chen Chu said several petrochemical companies have pipelines built along the sewage system in Chian-Chen district, which has both factories and residential buildings.

“Our priority is to save people now. We ask citizens living along the pipelines to evacuate,” Chen told TVBS television.

Rescue workers are looking for people trapped in the rubble but expect to find few, if any, because no buildings collapsed, Hsu in the disaster response center said.

Power was cut off in the area, making it difficult for firefighters to search for others who might be buried in rubble. About 12,000 people lost power and 23,600 lost gas service.

CNA said the local fire department received reports from residents of gas leakage at about 8:46 p.m. and that explosions started around midnight. CPC says it got reports around the same hour.

Closed-circuit television showed an explosion rippling through the floor of a motorcycle parking area, hurling concrete and other debris through the air. Mobile phone video captured the sound of an explosion as flames leapt at least 30 feet (9 meters) into the air.

One survivor of the blast said he tried to help before paramedics arrived.

“I was on my scooter just across the street, suddenly there was the explosion, a white car was blown toward me, and I saw the driver trapped in the car,” said Wong Zhen-yao, 49, owner of a car repair shop in the disaster area.

“There was still fire nearby. I tried to pull the guy out but couldn’t,” he said. “Only after the smoke was gone did I realize there was such a big hole in the middle of the road.”

One of the explosions left a large trench running down the center of a road, edged with piles of concrete slabs torn apart by the force of the blast. A damaged motorcycle lay in the crater, and other cars were flipped over. The force of the initial blast also felled trees lining the street.

After dawn on Friday, Taiwan’s Global News television channel showed a crane removing a van from a trench more than a meter (yard) deep. It showed other vehicles smashed completely. Flats and shops along Sanduo Road, near an elementary school, showed exterior damage such as burnt walls and toppled signs.

The explosions affected an area of two to three square kilometers, much of it sealed off.