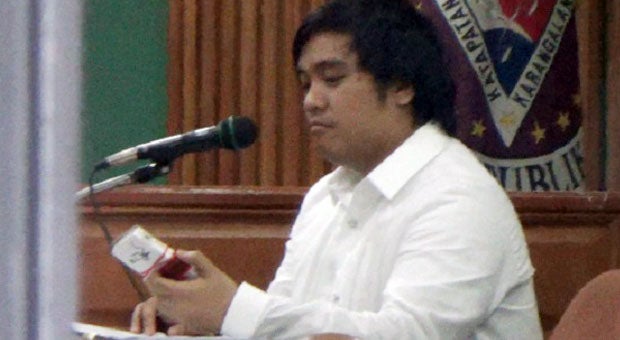 Returning to the witness stand for the prosecution, Luy said Sen. Bong Revilla, whose code name in Napoles’ records was Pogi, or handsome in Filipino, got 50 percent of the total cost of all projects funded by his Priority Development Assistance Fund (PDAF) allocations from 2006 to 2010.

“Attorney Richard Cambe collected the rebates of Senator Revilla every time he visited the office of JLN Corp.,” Luy repeatedly told the court, referring to the Napoles-owned company at Discovery Suites in Ortigas Center, Pasig City.

“(Cambe) also got his commission from all the transactions involving Revilla’s PDAF. The money given to them was covered by separate vouchers,” Luy said during his direct examination handled by Prosecutor Joefferson Toribio.

Revilla’s lawyer Joel Bodegon was unfazed by Luy’s disclosure which he dismissed as nothing but “hearsay.”

“In the first place, Luy admitted that they manufactured the documents and even forged the signatures on the documents. Senator Revilla has nothing to worry about,” Bodegon later told the Inquirer.

Both Revilla and Cambe are currently held for plunder and graft charges at the Philippine National Police Custodial Center in Camp Crame, Quezon City, in connection with the PDAF scam.

In his testimony at Revilla’s bail petition, Luy also presented to the Sandiganbayan First Division the external hard drive, which purportedly contained all the financial transactions of JLN from 2006 to 2012 with legislators and government agencies in the alleged P10-billion pork barrel racket.

The prosecution move caught the lawyers of Cambe, Revilla and Napoles by surprise. They questioned the legality and authenticity of the hard drive’s contents.

Ponferrada also noted that Luy’s records did not mention anything about Revilla getting his alleged share of the loot directly from Napoles.

In his previous testimony, Luy said he himself took the money from a cash vault at the JLN office and gave it to Cambe in several instances. He said the money was placed in trolley bags and paper boxes.

“Madam Janet would tell me that Senator Revilla had already received the money which Cambe collected from the office,” Luy said.

“Why is it that there is nothing there that says Senator Revilla himself personally got the money?” Ponferrada asked Luy.

“I don’t know,” Luy replied. “I relied on what Madam Janet told me.”

As financial officer of Napoles’ company, Luy said he recorded and listed all the money that each of the bogus NGOs had received and the portions of the funds which went to Revilla and other government officials who were in cahoots with Napoles.

“I would tell Madam Janet that the cash or check that Cambe collected for Senator Revilla was already recorded in the ledger,” he said.

For projects that Revilla assigned to the Technology Resource Center (TRC) and National Agribusiness Corporation (Nabcor) as implementing agencies, Napoles got 32 percent of the total project cost, Luy said.

He said 10 percent went to the heads of the implementing agencies, 2 percent to JLN as “management fee” and the remaining 5 percent to Cambe as his commission.

For programs that Revilla funded through the National Livelihood Development Center (NLDC), Luy said the senator also got half of the total project cost.

Napoles, on the other hand, received 40 percent while then NLDC head Gondelina Amata got 2 percent. Cambe got a 5-percent commission and the rest went to JLN as management fee.

According to Luy, Revilla received a total of P224,512,500 in kickbacks from Napoles. Luy said Cambe collected various amounts for Revilla during a five-year period, the biggest of which was a P28.5 million in cash, the alleged senators’ kickback for a P90-million project implemented by the TRC in 2009.

On another occasion, Cambe received P3 million as initial payment for his own commission, Luy said.

Luy also testified how Napoles instructed her employees to form fake farmers’ groups or foundations to apply for various livelihood projects to be funded by the PDAF.

Upon orders from Napoles, he said he and his fellow JLN employees forged the signatures of the beneficiaries and the original receipts for the supplies for the project. He said a cousin of Napoles helped them produce fake official receipts which they used to claim the funding for the projects.

Michael Ancheta, Cambe’s lawyer, tried but failed to block the presentation of the printed copies of the hard drive’s contents, pointing out that the documents were not marked by the prosecution during the preliminary conference and that their authenticity was still in question.

But Associate Justice Rafael Lagos said the court’s rules provided that the authenticity of electronic evidence could be established through other evidence.

Citing the information they supposedly received, David said the principal witness flew to other countries “numerous times” since 2006.

“We believe that Luy was actually out of the country during the times he claimed he witnessed Napoles giving money to Richard Cambe,” David told reporters after the eight-hour court proceeding.

Luy: Revilla got half of PDAF allocations for TRC, Nabcor, NLDC