MANILA, Philippines—Principal whistleblower Benhur Luy skulked his way to the witness stand carrying a bulging backpack and a bottle of water. The defense counsels didn’t know he was about to drop a bombshell.

Luy arrived at the Sandiganbayan on Thursday to testify against Senator Ramon “Bong” Revilla Jr. during his bail hearing of his plunder case over the pork barrel scam.

The defense did not mind Luy, who continued his testimony over the alleged transactions of his former boss, alleged mastermind Janet Lim-Napoles, with Senator Revilla for kickbacks. 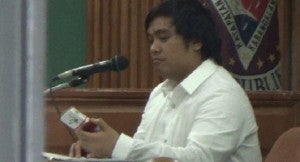 But when Luy drew out seven folders of documents from his bag, the defense counsels were caught by surprise, scrambling for legal ways to block Luy from testifying.

These are print-outs of hundreds of pages of financial ledgers from 2006 to 2012 of Napoles’ JLN Corporation with various personalities, including Revilla, who was identified as “R.B.R.” and “Pogi” (handsome) listed on the documents.

The files Luy printed came from his 500 gigabyte white hard drive, which he affixed with his initials “B.L” and his signature.

The hard drive has become known as the “Benhur Files.”

The same hard drive was used by the Philippine Daily Inquirer on their report detailing the alleged financial transactions of Napoles with dozens of lawmakers over the pork barrel scam.

Luy said he backed up his files in his old Windows computer to his new Mac computer, from which the files were again stored in the hard drive.

Revilla’s lawyer Joel Bodegon objected to the presentation of Luy’s files, saying it has yet to be authenticated, making these inadmissible as proof.

Michael Ancheta, lawyer of Revilla’s aide Richard Cambe, also said the court rules on technological evidence said such pieces of evidence must be accurate. He said Luy’s files were tantamount to hearsay.

Napoles’ lawyer agreed, saying Luy even admitted that it was not him who backed up his files from the Windows computer to the Mac, but another Napoles’ employee, Rodrigo Galay, who is also accused of graft.

In the direct examination by the prosecution, Luy confirmed that Revilla received kickbacks amounting to half or 50 percent of his Priority Development Assistance Funds.

Meanwhile, Cambe got five percent, while Napoles got 32 to 40 percent, Luy said.

Luy is Napoles’ entrusted finance officer, who turned his back on his boss after he was allegedly illegally ordered detained at their office by the businesswoman on suspicions that he was starting his own scam.

Luy turned state witness and exposed the scam after National Bureau of Investigation agents rescued him.

Luy: Revilla got half of PDAF allocations for TRC, Nabcor, NLDC