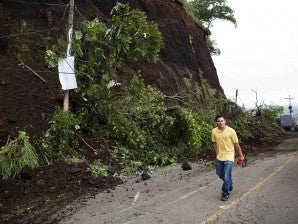 A man walks past a mudslide caused by an earthquake in Cuilapa, Guatemala, Monday, Sept. 19, 2011. Four earthquakes struck the southeastern part of Guatemala in less than two hours Monday afternoon, causing at least one death, authorities said. At least three people were reported missing. AP/Rodrigo Abd

GUATEMALA CITY—Mudslides in Guatemala killed one person and left 12 missing on Tuesday, a day after a series of earthquakes hit another region in the impoverished Central American nation, officials said.

The mudslides occurred near the small community of Santa Cruz Barillas, at an altitude of 1,500 meters (5,000 feet) near the Mexican border, some 400 kilometers (250 miles) north of the capital.

David de Leon, an emergency official, said four homes were swept away by the mud, with one person confirmed dead and 12 missing, in the latest incident provoked by heavy rains in the region.

Fire officials said they were awaiting delivery of heavy equipment to dig through the mud in the search for victims.

In another part of the country, rescue operations were continuing after a 5.8 magnitude quake and two smaller temblors struck and area some 130 kilometers (80 miles) south of the capital, killing at least one person.

Some 1,200 people were being housed in makeshift tents on a football field and a local military base after the quake damaged many structures in the area near Cuilapa .

Guatemalan President Alvaro Colom announced the suspension of classes in schools for the department of Santa Rosa and emergency officials maintained an orange alert.

Seismologists at the United States Geological Survey said the biggest of the three quakes hit Monday at around 12:34 pm local time (1834 GMT) with its epicenter 52 kilometers (32 miles) southeast of the capital.

It was preceded and followed by smaller, but still sizable temblors.

The quakes were felt as far away as neighboring El Salvador, but there were no reports there of injuries or damage.