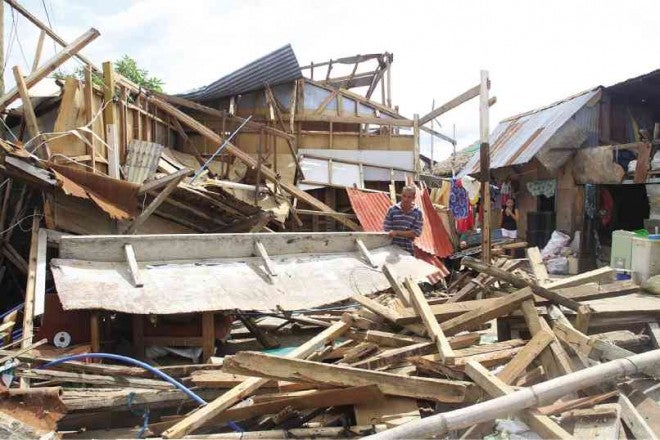 A TYPHOON survivor stares at what remained of his house in the coastal town of Pitogo, one of the hardest-hit towns by Typhoon “Glenda” in Quezon province. DELFIN T. MALLARI JR.

Acts of kindness are sometimes random and instantaneous as a group of seven youngsters in Lucena City showed when they brought a bag of groceries to the Quezon Convention Center where donations are being collected for at least 500,000 residents of Quezon province who suffered losses as a result of Typhoon “Glenda.”

The group leader, a teenage girl, said each of the group members contributed P100, diverted from their allowance for cell phone loads, to buy cans of sardines and packs of noodles.

“This bag of groceries is our token share to the ongoing relief drive for the victims,” said the students, who did not want to be identified.

The estimated cost of damage to government infrastructure, agriculture and coconut farms could reach billions of pesos.

Suarez said the relief campaign aims to inspire the people of Quezon to live the spirit of volunteerism and bayanihan (cooperation) to help rebuild the province.

Quezon Bishop Emilio Marquez, who urged all Quezon residents to lend a hand, said “no one can help us get back on our feet except ourselves.” He said the Catholic Church and different religious groups have also initiated relief campaigns in different parishes.

One of her staffers said the office has been receiving phone calls from Tacloban City residents living in Metro Manila, who want to reciprocate the provincial government’s help to the people of Tacloban after Supertyphoon “Yolanda” struck in November last year.

The Filipino-Chinese community in Lucena also donated a truckload of rice and boxes of canned goods.

Buelo said the relief caravans have reached 34 towns and two cities affected by the typhoon. They brought with them over 30,000 relief packs, each with 3 kilograms of rice, three cans of sardines, two cans of corned beef and five packs of noodles.

The relief packs are prepared by volunteers, policemen and Army soldiers at the Quezon Convention Center.

Members of Love One Another Foundation (LOAF), a humanitarian group based in Lucena, and their “kitchen on wheels,” have been traveling to different areas in Quezon to help feed the hungry victims.

On Tuesday last week, the group fed steaming porridge to hundreds of typhoon victims in Pitogo town in Bondoc Peninsula, mostly children of poor fishermen. “We will continue to help and bring the kitchen on wheels as our way of helping our provincemates,” said Joel Herrera, LOAF president.