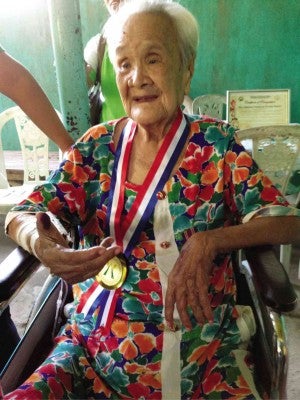 In what must have been a true spirit of comradeship, Simeona Punsalan-Tapang turned the attention of the public to the condition of former guerrillas of the Hukbo ng Bayan Laban sa Hapon (Hukbalahap) rather than to her war exploits as “Commander Guerrero.”

“Their condition is deplorable. They have been pushed to the corner and no one cares about them. They are afraid because they went through rough times,” Tapang, 92, said on June 30, when the Pampanga provincial government honored her for her contributions to attaining freedom and social justice.

She made the appeal again when a doctor and staff of the Philippine Veterans Affairs Office (PVAO) visited her in San Simon town on July 14. Tapang, who is suffering from diabetes, fought for her pension and PVAO, after verifying the information she submitted,

resumed payments in May.

Tapang, in effect, revived a question that has lingered in the last 71 years, reckoning from 1945 when the recognition process started: Have many Huks succeeded in getting pensions and benefits from the government?

It was not known how many Huk pensioners were supported by PVAO after 1977, when the late strongman Ferdinand Marcos issued Presidential Decree No. 1207.

The decree ordered the recognition of Huks under their leader, Luis Taruc, and the provision of educational and hospitalization benefits to them. Republic Act No. 6948 in 1990 entitled Huk veterans to P5,000 monthly old-age pension and additional benefits.

From 200 guerrillas and five squadrons during its founding on March 29, 1942, in Cabiao town in Nueva Ecija province, the Hukbalahap grew to 10,000 members and 76 squadrons until mopping up operations against the Japanese were over in 1945.

Two documents generated by PVAO—one called the “Washington List,” the other, the “Supplementary List”—had an estimated 25,121 Huks who were mostly identified by aliases, Maria Juanita Fajardo-Rivera, PVAO public information officer and chief of the agency’s strategic communications section, said.

The lists were drawn per order of PD 1207, which was a product of a settlement between the 1930 Communist Party of the Philippines (CPP) and the government, Rivera said.

“They didn’t have records of discharge from the service as well,” she said, noting that this made it more difficult for Huks to seek pension and other benefits.

She said the current figures are not expected to grow because there are no more pending applications from Huk veterans and claims using aliases have been denied. The names of those who died have been removed from the database as well.

Except for the Washington List, the Hukbalahap or its commanders or the hierarchy of the 1930 CPP that led the Hukbalahap did not keep an official record of Huk leaders or members, said Carlos Alejandrino, national president of the Hukvets Foundation for Nationalism and Democracy Inc.

Alejandrino is nephew of Castro Alejandrino, Taruc’s second in command who rose to become chair of the Hukbong Mapagpalaya ng Bayan (HMB), which replaced the Hukbalahap in 1950.

Taruc died in 2005. His son, Dr. Romeo Taruc, who has led the Hukvet Faith, could not be reached for comment.

“The Huks have been neglected because, primarily, the Philippine and United States governments do not recognize that [the Huks] had already liberated many areas in Luzon and the Visayas from Japanese control before the Americans returned in 1945,” Alejandrino said.

The US recognized only the service of the Hukbalahap’s Banal Regiment starting May 9, 1945. Only 1,387 officers and men were recognized in this regiment led by Bernardo Poblete alias “Commander Jose Banal.”

The Huks were treated with disdain and distrust because the army was led by the communist party, Alejandrino said.

He said the arrests of Huks after the amnesty proclaimed by President Elpidio Quirino in 1948 and the outlawing of the HMB and CPP through Republic Act No. 1700 in 1957 discouraged the combatants to surface and come forward to claim pension later.

Then, too, it was a matter of principle. A Huk in Arayat town did not file a claim for pension, saying “fighting for one’s country has no price.”

A fractious organization was another factor. The factions, according to Alejandrino, were led by Taruc, Jesus Lava and Silvestre Liwanag (alias “Commander Linda Bie”).

Alejandrino said his group checked the authenticity of the Huks’ claims by verifying these with surviving squadron commanders, like Lamberto Miranda of Arayat.

He suspected corruption, the kind where fake claimants connive with PVAO employees to skim public funds.