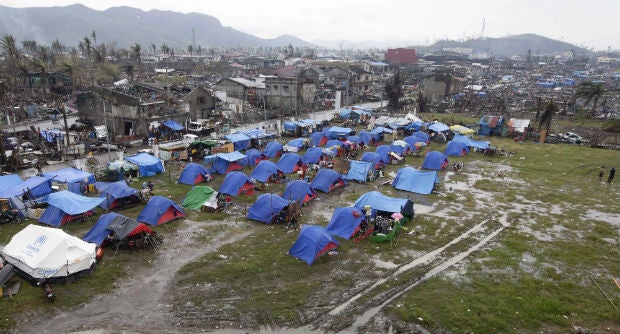 This Nov. 23, 2013, file photo, shows a tent city for typhoon survivors in Tacloban city. Leaders of municipalities ravaged by Super Typhoon Yolanda welcomed the approval of the rebuilding blueprint for five provinces and Tacloban City, which President Aquino announced in his State of the Nation Address on Monday, July 29, 2014.  AP PHOTO

TACLOBAN CITY, Philippines—It’s about time. But please hurry up.

Mayor Ricky Ramirez of Medellin town in Cebu province said his constituents had been waiting for eight months for the rebuilding to get off the ground.

“It’s about time that he said something concrete about the assistance we expected from the national government,”Ramirez told the Inquirer.

In his State of the Nation Address (Sona) on Monday, the President said he signed this month the rehabilitation and recovery plans for the provinces of Cebu, Iloilo, Eastern Samar, Leyte and Tacloban City. These areas were among the worst-hit by Yolanda (international name: Haiyan) that struck on Nov. 8, 2013.

The President also sought the cooperation of Congress for the release of funds for the implementation of the plans.

Bernardita Valenzuela, spokesperson of Tacloban Mayor Alfred Romualdez, who is now in the United States, also welcomed the President’s announcement but expressed hopes that the rehabilitation would start immediately. “It is easy to say that it was already approved. But the question after he approved it, then what?”

The President’s announcement was also welcomed by other mayors of Cebu including Salvador de la Fuente of Madridejos and Jose Esgana of Sta. Fe.

Mayors Arnold Betita of Carles town and Peter Paul Lopez of San Dionisio town in Iloilo said the approval of the plans would hopefully lead to the full recovery of their municipalities.

“Of course we welcome it. Even if it was done eight months after the super typhoon, it will surely help our people,” Lopez said.

Betita said the rehabilitation programs of the national government would complement the assistance of private organizations and individuals who have significantly helped the victims.

Officials in areas whose recovery plans have not been approved by the President are hoping that they will also receive assistance from the national government.

“We have been rebuilding and recovering on our own. But we will very much appreciate the programs and projects from the national government,” said Mayor Dante Bermejo of Panay town in Capiz province.

The whole province was also devastated by the super typhoon, crippling its seafood and poultry industry.

Valenzuela said the city was hoping the implementation of the P28-billion Tacloban Recovery and Rehabilitation Plan (TRRP) would start before the first anniversary of the super typhoon which is less than four months away.

National funding for the TRRP is essential because the annual income of Tacloban, the worst-hit city, is expected to drop from P800 million to P620 million because of the massive devastation.

Several officials and many typhoon victims in the affected areas have repeatedly complained of the delay and lack of assistance from the national government.

The mayors said their priority was providing safe shelters for victims, especially those that need to be permanently relocated.

In Cebu, about 700 families from 11 barangays (villages) still need to be relocated in Madridejos town, according to Mayor De la Fuente.

Mayor Augusto Corro of Daanbantayan town said 2,300 families from six barangays in the mainland and four barangays on two islets also needed to be permanently transferred.

Daanbantayan was among the worst-hit towns in northern Cebu during the onslaught of the typhoon. The cost of rehabilitating the town is set at P2.3 billion.

Housing is also urgently needed in Tacloban especially for families who lost their homes.

In Iloilo, about 4,000 families mostly from island-villages in San Dionisio town also need relocation and new houses, according to Mayor Lopez.

In Carles town, houses for 7,000 residents need to be constructed.

“We are looking for a site for the project of the (National Housing Authority) and with the funds from the national government, we can purchase land,” said Mayor Betita.

Valenzuela said she did not care whether it would be the city government or the national government that would implement the rehabilitation programs and projects.

“It does not matter who will do the repairs as long as this is done,” she said.–With a report from Felipe Celino, Inquirer Visayas