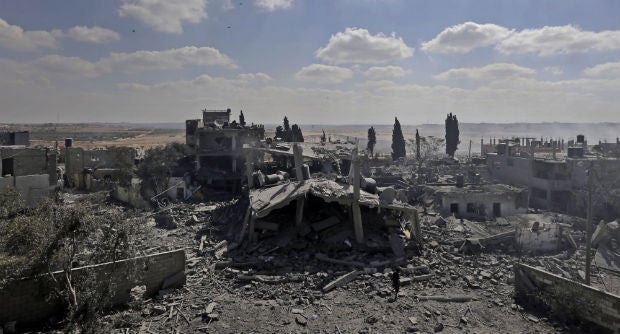 GAZA CITY — The end of a month of fasting was supposed to be a time to celebrate for Abeer Shamali. But instead, she spent the Muslim Eid feast at the grave of her teenage son.

Fellow mourners looked on glumly Monday as Abeer caressed the earth under which her dead son lay, and placed pink and white hydrangeas upon the mound of sandy soil where Thaer, 16, was buried just four days ago.

The boy was killed in Israeli shelling of Shejaiya in eastern Gaza, one of the areas worst-hit by a bloody military operation that has cost more than 1,000 Palestinian lives.

“Ramadan is supposed to be a month of holiness, a month of the Koran, not a month of battles,” Abeer said with tears in her eyes, referring to the fasting month.

“How do I feel?” she told an AFP correspondent.

“I feel like any woman who has to bury her son on Eid. What am I supposed to do?”

Thaer’s father Ahed, and two of the family’s eight other children, looked drained from grief and from a three-week war for which there seems no end in sight.

“He was just a kid – he’d finished school and had started working as an apprentice barber,” Thaer’s father Ahed Shamali said.

“This is the Eid of the martyrs.”

Abeer butted in, more dramatically: “This is the Eid of blood!”

The Israeli shelling killed Thaer on Thursday as he was on his way home in Shejaiya, where entire neighborhoods have been flattened.

The family home was destroyed in separate shelling but was empty at the time, Ahed said. They are staying with relatives while they look for more permanent shelter.

In the center of Gaza City, a few hundred men, women and children took part in early morning prayers at Al-Omari mosque to mark the Eid al-Fitr festival which ends Ramadan.

They bowed, knelt and whispered solemnly in worship, then filed out and swiftly dispersed.

No one lingered, for fear of air strikes that have been slamming into the narrow coastal territory almost incessantly since July 8.

An undeclared truce appeared to have taken hold on Monday after the UN Security Council joined US President Barack Obama in calling for an immediate ceasefire during Eid’l Fitr.

An Israeli military spokeswoman told AFP that since midnight no Gaza rockets had hit Israel, and the Jewish state had carried out no strikes in the Palestinian enclave.

However, the mood was somber in Gaza for the Eid when families normally gather in large numbers to celebrate, eat and rejoice.

Instead of invading relatives’ houses to feast, some went straight home. Many others, like the Shamali family, walked or drove to cemeteries to pay their respects to those killed.

“After the destruction and war we’ve seen here, there’s no Eid for us now,” said 44-year-old Issa.

“We pray, honor our dead, and then go home.”

The streets were mostly quiet. A few rubbish collectors picked up refuse which had festered for days, with a foul waste smell pervading the air.

Small groups of men drank tea outside workshops, whose shutters were battened down, but did not venture far, while curious children inspected houses reduced to rubble by air strikes.

At Sheikh Radwan cemetery, where Thaer Shamali is buried, one family cleared rubble off the grave of a relative, which was covered after a nearby building was hit and collapsed.

A few dozen people wandered around the vast cemetery, some placing fresh flowers on old gravestones.

But for Thaer Shamali, there was just a mound of earth and no plaque yet to show he had not even reached adulthood.

Read Next
Aquino: Next leader should continue ‘tuwid na daan’
EDITORS' PICK
SM continues to send relief assistance to remote towns in Batangas
‘A greener, cleaner tomorrow’: A how-to guide for Filipinos who want to help with today’s energy crisis
Get exciting deals and discounts when you download the new McDonald’s App
5-year-old Chinese boy in Cebu tests negative for novel coronavirus
China expands lockdowns to 25M people to halt viral outbreak
DOH: Second person ‘under investigation’ for 2019-nCoV in Tacloban City
MOST READ
Palace: US Senate move also made Duterte junk VFA
Virus scare: 600 Chinese from Wuhan must leave PH by Jan. 27
Philippines orders 12 helicopters from Russia—Duterte
Duterte on Trump: He’s nice, I won’t curse him
Don't miss out on the latest news and information.