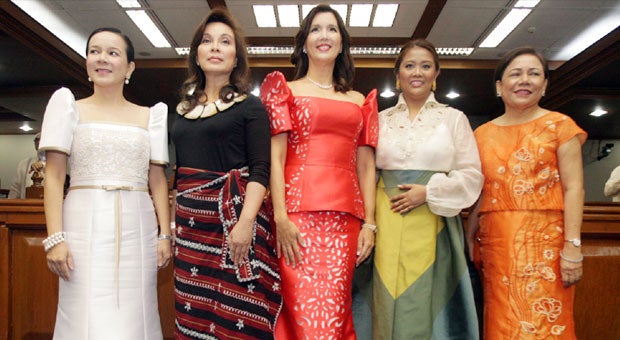 MANILA, Philippines—A battle between yellow and peach on the red carpet of the House of Representatives marked the President’s State of the Nation Address (Sona) on Monday, delivered as he faced an impeachment threat and all-time low public approval ratings.

Many of President Aquino’s allies in the House wore their politics close to their hearts, with yellow ribbons—the Aquino color—on their chests.

The ribbons were handed out to lawmakers, but some were quick to say that not wearing the yellow ribbon did not indicate lack of support for the President.

In contrast, a small but vocal group of seven militant lawmakers came in peach to denounce Aquino’s alleged mishandling of funds through the Disbursement Acceleration Program (DAP).

Joining them in the peach brigade was former yellow activist and erstwhile Aquino supporter Mae Paner—more popularly known as Juana Change—who said she switched colors because the administration’s straight path led to a cliff.

Aklan Rep. Teodorico Haresco told reporters that the yellow ribbons were meant to signify support for the President and his reform programs.

“The straight path continues,” said Haresco, a member of the House majority.

He initially said he made the ribbon himself but when told the ribbons worn by lawmakers all looked the same, he said somebody had handed these out at Monday’s session.

“In fact, we all hurried to grab one,” he said.

“I have supported the President. I will continue to suport him. Yes, the yellow is the statement of Mrs. Drilon,” he said.

Mila Drilon herself gave a thumbs-up when reporters asked if the yellow signified her support for Aquino.

Iloilo Rep. Niel Tupas Jr. said he chose not to wear the yellow ribbon because as chair of the House justice committee, he would handle the hearings on the impeachment complaints against the President.

“I should show neutrality when I preside,” Tupas said.

But he also said he continued to support the administration.

“The straight path should accept all colors because it is a democracy,” Rosales said.

But she also said the straight path had potholes, having to go through problems like typhoons and earthquakes, not to mention the DAP controversy.

Ifugao Rep. Teddy Baguilat said somebody just gave him the yellow ribbon to wear and he donned it to indicate he was a member of the Liberal Party and an ally of the President.

“But even without the ribbon, I am still an ally,” Baguilat added.

Many senators did not sport the yellow ribbon but those belonging to the majority still professed their support for the President.

Despite the controversies besetting the administration, the usual trappings that show the gathering to be the glitzy event it was were present.

Red carpets lined the three main entrances to Batasang Pambansa and photo booths were again available for those who wanted souvenirs of their attendance.

Yellow in his heart

Among the head-turners was actress Assunta de Rossi, who walked the red carpet without her husband, Negros Occidental Rep. Julio Ledesma, a frequent absentee in House sessions.

The arrival of boxing superstar and Sarangani Rep. Manny Pacquiao and his flamboyant mother, Dionisia, caused a stir among the Congress staff, who rushed forward to take their pictures.

“Is that really necessary?” said the younger Aquino who came with his wife, Timi Gomez-Aquino. Cupping his face, he quipped: “Isn’t this enough?”

“Maybe my yellow ribbon is in my heart and I don’t need to wear it,“ he said.

Others were not so shy to wear their colors.

Nearly all the President’s men and women appeared together on the red carpet with yellow ribbons pinned to their terno or barong.

Rehabilitation czar Panfilo Lacson doused speculation that this was another case of the President’s Cabinet members sending a message to his critics.

“It was only convenient to go as a group because of the traffic,” he told reporters.

Members of the opposition Makabayan bloc wore peach (actually closer to a light pink) and also walked the red carpet as a group.

Representatives from Bayan Muna, Gabriela, ACT Teachers and other left-wing groups have endorsed the impeachment complaints against Aquino in connection with the DAP controversy.

The peach attire was intended to draw support for the impeachment moves against the President.

Budget Secretary Florencio Abad said the DAP controversy only made the Cabinet “sharper, more prepared … more rigorous with our work.”

“All of these things will make for a better government,” said Abad, who wore a yellow ribbon with the Philippine flag incorporated in the design.

Interior Secretary Mar Roxas said he would give the President a score of “alas” (ace) for his performance since 2010.

“Why not? If you will look at where we were four years ago and where we are now, there was a dramatic change,” he said.

Sen. Francis “Chiz” Escudero said the country needed to “move on” and not dwell on the DAP controversy.

He came with his girlfriend, actress Heart Evangelista, who was questioned by reporters about her dress.

“Red is my favorite color and Renee Salud is my escort because we share the same advocacy of promoting LGBT (lesbian, gay, bisexual, transsexual) rights,” Aragones said.

“They were all wearing yellow ribbons to show support for the President, so I asked if I could have one,” he said.

Not everybody who attended the Sona relished the red carpet walk.

Sen. JV Ejercito, who arrived with his wife, shunned the red carpet altogether and went straight to the lounge.

The red carpet also proved a meeting ground for personalities from opposite sides of the political divide, though they chose to ignore each other.

Former Akbayan Rep. Risa Hontiveros, an Aquino ally, walked by as members of Makabayan were being interviewed by the media.

But Hontiveros stopped to say hello to Mae Paner, who was with the Makabayan lawmakers.

Paner said she bought a new peach dress for the Sona at a public market for P1,850.

She said she would return to yellow if the President would bring about real change, especially in the lives of the downtrodden.

Three senators in detention over the pork barrel scam chose not to watch the President’s address on television, police said.

Senators Jinggoy Estrada and Bong Revilla are held at the Philippine National Police Custodial Center while Sen. Juan Ponce Enrile is detained at a special ward at PNP General Hospital.–With a report from Julie M. Aurelio