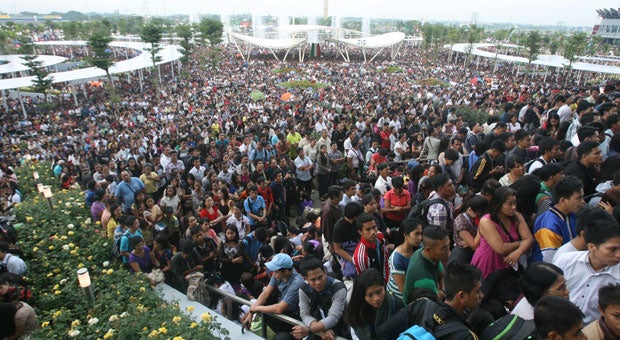 BOCAUE, Philippines – Residents here were told what to expect, but they were still amazed by the multitudes from all over who assembled at the newly opened Philippine Arena at the vast corner of their town to celebrate the centennial of the Iglesia Ni Cristo (INC) on Sunday.

The INC announced that the Arena broke the Guinness Record for world’s biggest mix-used indoor theater and for hosting the world’s largest gospel choir, composed of more than 4,700 singers who performed at the centennial service.

By 9 a.m., a two-hour worship service ended and the 55,000 people packing the Arena broke out into song.

The Philippine Sports Stadium nearby was also filled with over 20,000 people. Every open space in between was filled with people.

The event organizers claimed over two million people had visited the Ciudad de Victoria, where the mammoth stadia are located.

Francis Tolentino, chair of the Metro Manila Development Authority (MMDA), which oversaw the traffic and security of the centennial event, estimated the crowd at 2 million.

As early as Saturday, the INC had recorded 1.4 million members who arrived here for the centennial service.

INC Executive Minister Eduardo Manalo, who led the special service, said the huge number of participants appeared to suggest that the INC has been winning over more Roman Catholic Church members.

But the number of INC guests proved that Bocaue and the rest of Bulacan province coped well with the first of many INC affairs that would be held in this town, according to Gov. Wilfredo Sy-Alvarado.

Bocaue officials and residents helped make sure the logistics were in place for their guests, accepting that this was a litmus test of future Arena events that would require the town’s services.

“The centennial celebration is the beginning of what we anticipate to be a frequency of big events at the Philippine Arena and the Philippine Sports Stadium,” said Jonathan San Juan, a co-owner of Dad’s Vineyard and one of the businessmen who set up new ventures like hotels to accommodate the INC guests.

Many INC members had camped here since Saturday night but were also able to join the service and commemoration, courtesy of giant screens put up around the complex.

“The anticipated problems from the arrival of so many vehicles never happened. Everything went smoothly. Participants began streaming back home and traffic was okay,” he said.

The northbound lane of the North Luzon Expressway (NLEx) on the approach to the Arena was closed to motorists, serving instead as a wide parking area for more than 15,000 buses and other vehicles. Rodrigo Franco, president of the Manila North Tollways Corp. (MNTC), said the last time they closed the lane was during floods caused by storm “Ondoy” in 2009.

When the centennial celebrations ended, some INC members had to walk back a kilometer to the Bocaue toll exit of NLEx to reach their vehicles.

Garbage, another anticipated problem, was managed well, Alvarado said. Litter was minimal because the motorists were required to bring their own garbage containers, he said.

The task force also provided emergency health care, dealing with over 100 medical complaints such as fainting cases due to the overcrowded facilities, he said.

Many Bulacan businessmen set up food stalls along with fast-food restaurants from Metro Manila outside the gates of the Arena.

At the Bagbaguin-Tabing Bakod bypass gate, which is accessible through Sta. Ana town, businessman Manny Alvarez said 200 stalls were put up at Barangay Mahabang Parang and on Sanders Street in Sta. Maria town and outside the gate in Barangays Duhat and Bulacan in Bocaue.

Bocaue, also known for its firecracker trade, entertained the INC guests with a fireworks display on Saturday night.

In his centennial address, Manalo said the growing INC population also reflected what was perceived as the declining number of the Catholic flock, citing online reports.

“While their churches are being closed down, we managed to buy one of them in Miami, in the United States. There were 13 Catholic Churches that suffered this sad fate, and I chose to buy the most beautiful one and made and developed it as one of our churches,” he said.

“Our church was established by a Filipino but it has now flourished and is spread throughout the world,” he said.

“If God is not with us, we will not be able to build our churches worldwide in the time of world crises, as well as here in the Philippines while there is also an economic crisis,” he said.