A “shocked” Janet Lim-Napoles broke down in tears at a Sandiganbayan hearing on Friday after the court ordered her transfer to the Camp Bagong Diwa jail in Taguig City, where she might just possibly become bunkmates with her coaccused Gigi Reyes.

Napoles, the alleged mastermind of the P10-billion pork barrel scam involving several lawmakers and their staff, left the antigraft court visibly distressed after the Third Division issued a resolution ordering her transfer from Fort Sto. Domingo in Sta Rosa City, Laguna province, to the custody of the Bureau of Jail Management and Penology (BJMP).

Napoles is now to be held in the dormitory for female inmates at the Bicutan camp, where Reyes, Sen. Juan Ponce Enrile’s former chief of staff, has been detained since early this month.

“She’s in shock. She’s scared. As you saw, she was crying,” her lawyer Stephen David told reporters minutes after his client was whisked away from the courtroom by a phalanx of police escorts.

Napoles, who was wearing a bulletproof vest over a blue hooded jacket and jeans, ducked from the cameras and avoided the media. But a glimpse of her face inside the courtroom revealed eyes red from crying.

Also on Friday, the same Third Division ordered Senator Enrile suspended from office for 90 days over his alleged participation in the funneling of more than P10 billion in congressional pork barrel funds to bogus nongovernment organizations linked to Napoles.

The Third Division justices found merit in the state prosecutors’ motion seeking the suspension of the 90-year-old Enrile to prevent him from using his position to influence the plunder case.

“Accused Juan Ponce Enrile is hereby suspended from his position as senator of the Republic of the Philippines, and from any other public office which he may now or hereafter be holding for a period of 90 days from receipt of this resolution, unless a motion for reconsideration is seasonably filed,” read the resolution, promulgated on July 24 and released on Friday.

The court, headed by Sandiganbayan Presiding Justice Amparo Cabotaje-Tang, rejected Enrile’s argument that it was far-fetched, if not impossible, for him to commit any act of malfeasance to frustrate the prosecution. 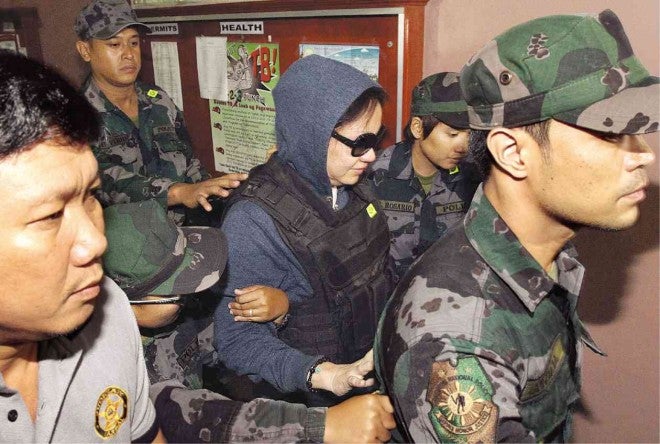 ABOUT TIME Luck runs out for Janet Lim-Napoles though she’s wearing what she calls her “good luck” hoodie jacket as she is escorted out by policemen after a clerk of court announced a court order for her transfer from her detention quarters at Fort Sto. Domingo in Sta. Rosa City, Laguna province, to Camp Bagong Diwa. BOY SANTOS/POOL

Citing jurisprudence, the court said it was not required by law to determine whether preventive suspension was needed to prevent the accused from using his position to influence the case.

“The presumption is that unless the accused is suspended, he may frustrate his prosecution or commit further acts of malfeasance or do both,” it said.

Dennis Pulma, the Third Division clerk of court, explained in a press briefing that the suspension order against Enrile was only with respect to the plunder case, and not to the charges related to the Anti-Graft and Corrupt Practices Act.

“As far as graft cases are concerned, the Third Division has yet to arraign all the accused,” he said.

The prosecution has a pending motion to amend the charges in the graft component of the case in order to correct purported clerical errors.

Fort Sto. Domingo not a jail

In a July 24 resolution released on Friday, the division headed by Tang noted that Napoles has been charged with plunder, a nonbailable offense.

“The rule is that persons charged with the commission of a crime must be detained at the jail nearest to the court,” the resolution read.

It noted that under Republic Act No. 6975, which created the Philippine National Police (PNP), jails are supposed to be established for the custody and safekeeping of persons awaiting trial. That law mandates that the BJMP exercise control over all city and municipal jails, the court said.

“The [PNP] Special Action Force Training School in Fort Sto. Domingo, Sta Rosa City, Laguna, is not under the jurisdiction of the BJMP, hence it is not a jail,” the court said.

However, Napoles was returned to Fort Sto. Domingo on Friday as her lawyer said she “can’t be removed” from the Laguna jail without an order from the Makati court that had earlier committed her to the facility.

“The Sandiganbayan is a higher court but [this is a question of] jurisdiction of her person. Didn’t Makati RTC order her detained at Fort Sto Domingo? That order has not been lifted by the court,” said David.

He said that the PNP, as a courtesy to the Sandiganbayan, would be asking for advice from the Makati court on how the police would comply with the latest court order.

Noting how the Sandiganbayan directive was in conflict with the earlier order of the Makati court, PNP spokesperson Chief Supt. Reuben Theodore Sindac said the PNP would have to consult its legal service to clarify the conflicting orders.

“Until we clarify these issues, there will be no movement,” Sindac said.

The official said although BJMP personnel went to Fort Sto. Domingo on Friday night to escort her, it was decided that the issue be cleared first with the court on Monday.

“We will clarify with the court after the weekend. Anyway the important thing is she is in detention,” Sindac said.

Clerk of court Pulma explained that the court order was “for the BJMP to cause the immediate transfer of the accused,” meaning the order was not for her current police custodians to effect the transfer.

Sindac clarified that should the BJMP turn up at Fort Sto. Domingo to ask for Napoles, the PNP would turn her over to their custody.

“If that happens, we will no longer seek clarification since the BJMP is the agency which has custody over detainees,” he said.

Sindac said he had been informed that the BJMP had already received a copy of the commitment order for Napoles’ transfer and that a BJMP team was being readied to escort Napoles to the BJMP jail.

Napoles’ lawyer said they were shocked by the suddenness of the transfer order.

“We had no clue. This was motu proprio… meaning this was at the court’s own initiative. We were shocked,” David said.

“I mean any person, if you bring them to an unfamiliar territory, will be scared. We hope we can inspect the facility first so we can prepare her,” he said.

Pulma said the Sandiganbayan was just being true to its earlier pronouncements on the detention of Reyes.

“The court is being consistent. Accused persons should be jailed in a facility under the supervision of the BJMP,” he said.

Sindac said the order for Napoles’ transfer to Camp Bagong Diwa and to BJMP custody was a welcome development, as “we can now better mobilize our police forces for their primary police duties.”

In particular, the Regional Public Safety Battalion and Special Action Force in Calabarzon can now be better utilized for internal security and other police work, he said.

The PNP has to mobilize additional troops to secure Napoles at Fort Sto. Domingo and for her trips to the Sandiganbayan hearings, spending P50,000 for each trip and P150,000 for her detention in the Laguna camp.

In the resolution ordering Enrile’s suspension, the justices said they did not agree with Enrile’s argument that his suspension would disenfranchise the more than 15 million Filipinos who voted him into office.

“The imposition of preventive suspension is not a penalty but a mere preventive measure. Thus, there would be no instance when the 15 million people who voted for accused would be disenfranchised considering that he would still remain a senator albeit preventively suspended only,” the resolution read in part.

The court also cited the Supreme Court decision on April 18, 2001, upholding the preventive suspension order imposed by the Sandiganbayan on Sen. Miriam Defensor-Santiago in connection with graft charges filed against her when she was still immigration commissioner in 1988.

The case had dragged on for years, and Santiago was already a senator when the Sandiganbayan ordered her suspension for 90 days on Jan. 25, 1996, prompting the senator to take the case to the Supreme Court.

Some two years after Santiago had already been acquitted of the graft charges, the high court ruled that: “Republic Act No. 3019 does not exclude from its coverage the members of Congress and that, therefore, the Sandiganbayan did not err in thus decreeing the assailed preventive suspension order.”

The Third Division said Enrile tried to “insulate himself from the reach” of that piece of jurisprudence by arguing that the acts for which he was charged was relative to his office as a member of Congress, hence Congress was in a better position to discipline Enrile.

But the court said it found this argument “baseless” and cited another piece of jurisprudence in which the Supreme Court ruled that suspension pende lite (pending litigation) applied to “any office which the officer might currently be holding and not necessarily the particular office in relation to which he is charged.”

Enrile, who is under hospital arrest at the PNP General Hospital, is the second senator to be preventively suspended over the pork barrel scam.

On July 18, the Sandiganbayan’s Fifth Division ordered the suspension of detained Sen. Jinggoy Estrada, a coaccused in the plunder and graft raps, along with another actor-politician, Sen. Bong Revilla.

Estrada and Revilla are detained at the PNP Custodial Center in Camp Crame, Quezon City.

As in the suspension of Estrada, the Senate will comply with the Sandiganbayan order directing a similar preventive suspension of Enrile, Senate President Franklin Drilon said.

Drilon said Sen. Tito Sotto as the deputy minority leader would take over Enrile’s duties as the minority leader for the duration of the suspension. With reports from Julie M. Aurelio and Nikko Dizon

Napoles wants to stay in Fort Sto. Domingo, not in city jail

Napoles to be with friend Gigi Reyes in Taguig jail