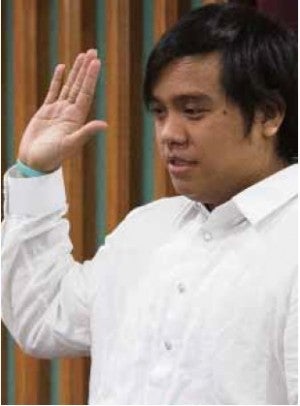 STAR WITNESS Benhur Luy takes his oath at the Sandiganbayan as a witness in the plunder case filed against Sen. Bong Revilla et al. ALEXIS CORPUZ

On his first day on the witness stand at the bail hearing of the accused—Sen. Bong Revilla, his executive officer Richard Cambe and Napoles—at the Sandiganbayan, Luy also identified lawyer Marciano “Rocky” Delson as the other person who helped Napoles put up foundations and make them eligible for getting the Priority Development Assistance Fund (PDAF) of lawmakers.

Delson was the private lawyer of JLN Corp., the company of Napoles named after her initials.

This was the first time Luy revealed Jarmin’s ties to Napoles and his testimony appeared to back up Napoles’ affidavit submitted to the Department of Justice in which Napoles claimed to have met former Batanes Representative and now Budget Secretary Florencio Abad, supposedly her mentor in the pork barrel scam, through Jarmin.

In her affidavit, Napoles said: “Around 2000, I was introduced to Congressman Florencio Abad by Mr. Manuel Jarmin. We met at the Japanese restaurant in Edsa Shangri-La Plaza Hotel. In that meeting, he told me about a project worth P10 million. He showed me the special allotment release order (Saro) then explained to me what it was for. Before the meeting ended, I handed him P2 million. When the notice of cash allocation was released, I gave him another P2 million.”

“There were individuals who had a big influence on my knowledge and transactions with government. It was from former Congressman Butch Abad that I learned that an NGO or cooperative was needed to do business with the agencies,” Napoles said in Filipino in her affidavit.

Jarmin did not return Inquirer’s call or reply to a text message. Records showed that Jarmin was also one of three nominees of A-SMILE, a party-list group formed by Napoles’ husband, Jaime, a member of the Reform the Armed Forces Movement (RAM).

The other Napoles adviser named by Luy, Delson, is a faculty member of San Beda College of Law and a lawyer of Progressive Development Corp., the retail and restaurant arm of the Araneta Group.

Asked by a prosecution lawyer, Ombudsman Director Joefferson B. Toribio, about those who helped Napoles create and register 21 NGOs from 2004 to 2008, Luy named Jarmin and Delson.

“Jarmin was a former director of NAFC (National Agriculture and Fishery Council) of the DA (Department of Agriculture). He is now with Livestock Development Corp.,” said Luy whose testimony on the formation of the Napoles NGOs was cut off by repeated objections from the defense team.

In a statement released on May 27, shortly after Napoles’ affidavit went public, Abad denied having met or having made cash transactions with Napoles. He said the alleged cooperative he supposedly used in their deal was nonexistent based on official records.

“How is it possible for Ms. Napoles to have a close professional relationship with me when she has been trying—with great effort, it appears—to make my acquaintance for years now?” Abad said.

In her affidavit, Napoles said some individuals, such as Technology Resource Center Director General Dennis Cunanan, a coaccused in the pork graft case, had offered to rent out NGOs to get PDAF allocations.

“However, I feared that these NGOs that they rented out had problems as I heard that the incorporators they use are either dead or not existing,” Napoles said in explaining why she made sure that her NGO complied with the law, such as registering with the Securities and Exchange Commission (SEC) and Bureau of Internal Revenue.

“Before an NGO can transact, the agency will have to inspect and accredit the said NGO. For such reasons, as far as I know, the NGOs I am associated with are legal and not bogus as alleged and highly publicized,” she said.

While the defense team moved to block the prosecution’s questioning of Napoles which unduly delayed what was supposed to be a summary bail hearing, Toribio told the court that his detailed questioning of Luy would help establish that Napoles owned and controlled the NGOs.

Toribio said most of his questions were not addressed in Luy’s affidavits that were submitted to the National Bureau of Investigation and the Office of the Ombudsman.

Luy was allowed by the Sandiganbayan First Division, chaired by Associate Justice Efren de la Cruz, to speak in Filipino (the prosecution asked him in English) while the court translated Luy’s reply into English. Luy appeared comfortable on the witness stand and sure of his answers.

The witness said he himself filed the SEC papers of the NGOs on Napoles’s direct orders.

Toribio explained that Napoles needed to keep the NGOs fully compliant in order to be accredited by the implementing agencies where senators and representatives coursed through their pork barrel.

Luy also claimed that he was the one who forged many of the signatures on the incorporation papers. But Revilla lawyer Joel Bodegon claimed this was contrary to Luy’s claim in his previous affidavit that it was another JLN employee, Evelyn de Leon, who forged the signatures.

Luy appeared in court in a white barong under a black bulletproof vest (which he removed when he took the witness stand).

During the hearing, Luy’s lawyers moved to quash a motion to subpoena the bank accounts of Luy, his parents and siblings, and other whistle-blowers.

Luy’s lawyers were adamant that their client had nothing to hide despite his reluctance to show his bank records after being liberal in sharing the bank records that would pin down Napoles.

Luy’s camp will ask the Sandiganbayan to quash its order to five commercial banks to present their documents in connection with the accounts of Luy, according to his counsel Raji Mendoza.

Mendoza said the petition filed by Napoles’ lawyers was a case of harassment because Luy’s bank accounts were already the subject of an ongoing forfeiture case in a regional trial court in Manila.

He said the he would file a motion to quash the subpoena duces tecum issued by the Sandiganbayan for the accounts of Luy in several banks.

“The rules allow quashal of subpoena if it is unreasonable and oppressive or if it is irrelevant,” Mendoza said.

He said the subpoena was “unreasonable and oppressive because it violates the law and the Constitution.”

Luy, a state witness, has the right to be protected from self-incrimination, according to his lawyer.–With a report from Nancy C. Carvajal