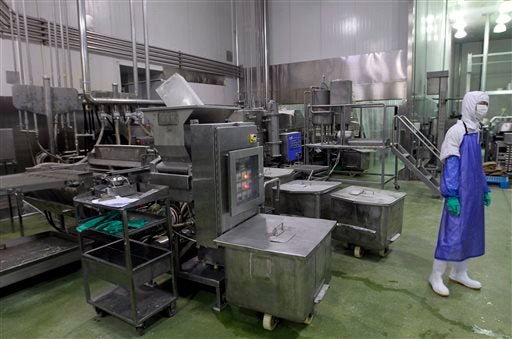 In this July 20, 2014 photo released by China’s Xinhua News Agency, a worker stands near a shut down machine at the workshop Husi Food Co. in Shanghai, China, a meat supplier for McDonald’s and KFC owned by OSI Group, a privately-held company that’s based in Aurora, Ill. OSI was thrust into the spotlight this weekend when a Chinese TV station reported the Husi plant repackaged old beef and chicken and slapped new expiration dates on them. AP

NEW YORK — It isn’t a household name, but the company at the center of a food scandal in China helps make some of the world’s most popular foods, including the Big Macs and Quarter Pounders served at McDonald’s locations.

OSI Group, a privately-held company based in Aurora, Illinois, was thrust into the spotlight this weekend when a Chinese TV station reported that one of its Shanghai plants repackaged old beef and chicken and slapped new expiration dates on them. The scare has ensnared chains including McDonald’s, KFC, Burger King and Starbucks, all of which got ingredients from a unit of OSI (pronounced OH-see) in the region called Husi Food Co.

The controversy deepened Wednesday when five workers for Husi, were detained by police. An official with China’s food safety regulator told the Xinhua News Agency that some of the illegal conduct it uncovered was an arrangement “organized” by Husi.

None of OSI’s more than 50 other plants around the world have been implicated and CEO Sheldon Lavin noted in a statement that authorities in China have inspected and found no issues at its other facilities. He called what happened at the Shanghai location “completely unacceptable.”

The scandal is a blemish for OSI, which began as a family-run meat market in 1909 and prides itself on its high standards. The company notes on its website that it has a “strong heritage of quality and service” and that food safety and quality assurance are “guiding principles.”

Its business took off after Ray Kroc tapped it in the 1950s to be a beef supplier for McDonald’s Corp. OSI grew alongside McDonald’s as the hamburger chain expanded around the world, and even helped create the McRib.

OSI doesn’t have to report financial information, but according to PrivCo, which researches privately-held companies, it had $6.13 billion in sales last year. OSI doesn’t publicly disclose all of its clients either, but it supplies numerous big-name chains including Chipotle Mexican Grill Inc., for which it cooks some beans and carnitas and barbacoa meats.

In the U.S., OSI has said it has systems in place to ensure products can be located and taken out of the system within two hours if any issues arise. Executives have said they work with an outside public relations agency to periodically stage mock crises to be prepared for real-life controversies.

Richard Adams, a former owner of McDonald’s restaurants in Southern California who now runs a consulting firm for franchisees, said OSI closely oversees its production process in the U.S. and that he didn’t know how the lapses in China occurred.

“They wouldn’t be a McDonald’s vendor if they weren’t producing quality products,” Adams said.

It’s unknown how much of OSI’s revenue come from China or whether it has similar safety checks there, but the company is already dealing with fallout from the controversy at its Shanghai plant.

Yum Brands Inc., which owns KFC, Pizza Hut and Taco Bell, said Wednesday that OSI wasn’t a major supplier for its restaurants in any region of the world but that it was terminating all agreements with the company, including in Australia and the U.S. The company, based in Louisville, Kentucky, added that it reserves the right to take legal action against OSI.

Over at McDonald’s, the impact on the menu was far greater. A spokeswoman, Heidi Barker Sa Shekhem, said the Shanghai plant supplied products including sausage patties, ham patties, beef patties and chicken nuggets. As of Wednesday, McDonald’s locations in Shanghai were still unable to serve some items.

In the past, OSI has said it is the biggest supplier of protein for McDonald’s in the world.

McDonald’s said in a statement Wednesday that it has been in direct contact with OSI’s management and that it would transition to supply its restaurants from other OSI plants in China, including a new one in Henan.

Read Next
EU wants curbs on energy use to reduce link to Russia
EDITORS' PICK
Latest patient brings number of COVID-19 cases in Cebu to 29
DOLE Bicol shells out P45.7M in aid for 9,000 displaced workers
Macalintal: NBI on ‘fishing expedition’ as no ‘genuine’ case vs Vico
Anne Curtis, Angel Locsin, and Gabbi Garcia: Celebrity tweets on the state of the nation
Vico Sotto replies to NBI, asks for clarification
Senators on Duterte ‘shoot’ warning: ‘Let’s address hunger’ instead
MOST READ
Angelica Panganiban on endorsing Duterte in 2016: ‘Patawarin niyo ko’
PACC to NBI: Probe Robredo for ‘competing with national govt’ in fight vs COVID-19
PACC’s COVID-19 motto? ‘Lahat ng tutulong, ikukulong’ — Lacson
5 Filipinos on Forbes Asia’s “30 Under 30” roster
Don't miss out on the latest news and information.