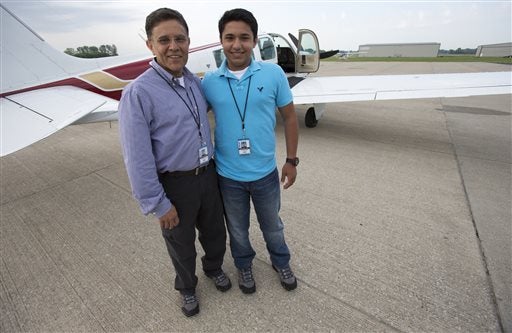 In this Thursday, June 19, 2014 photo, Babar Suleman and son Haris Suleman, 17, stand next to their plane at an airport in Greenwood, Ind. before taking off for an around-the-world flight. AP

INDIANAPOLIS—A US teenager who was attempting to set a record for an around-the-world flight was killed when his plane crashed in the Pacific Ocean, and crews were searching Wednesday for his father, who was also onboard.

The teenager’s sister, Hiba Suleman, said the trip had been a dream of her father’s for years and that her brother was also excited about it. Haris Suleman had recently obtained his pilot’s license and instrument rating, which authorized him to fly an aircraft over oceans, and planned to be the pilot in command except in an emergency.

Hiba Suleman told reporters Wednesday that her father and brother had undergone training in how to handle an ocean landing and wore protective suits while flying over water. She said it was unusual for them to take off at night but didn’t know whether that contributed to the crash.

“With a trip like this, there’s always a risk, and they did prepare for that risk. You can plan all you want, but sometimes things just don’t happen the way you planned,” she said.

The Sulemans left Indiana state on June 19 in hopes of making the trip in 30 days to set the record for the fastest circumnavigation around the world in a single-engine airplane with the youngest pilot in command to do so. The father and son were using the trip to raise money for the Citizens Foundation, a nonprofit that builds schools in Pakistan.

They missed the 30-day timetable, in part due to food-borne illness, but planned to return home Sunday.

The Sulemans had made stops throughout Europe, Africa, Asia and the South Pacific, and the teenager told The Indianapolis Star earlier this month that he was enjoying each visit.

“There is so much beauty and culture in each country that I couldn’t possibly witness all that I want to in the span of two days,” he said in an e-mail to the newspaper. “That’s the maximum time we’ve been able to spend at a stop.”

Light plane crashes on banana plantation; no one hurt