You ain’t seen nothing yet: Aquino on SC case again 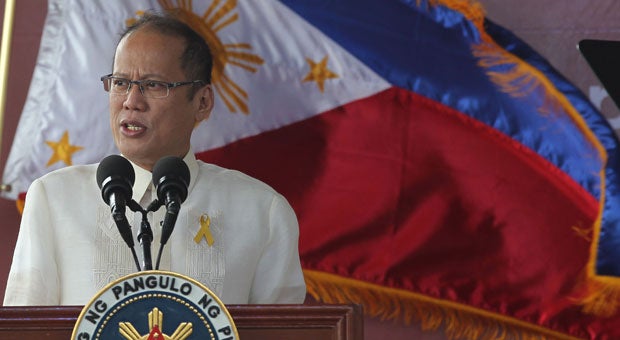 Showing no worry over violating the sub judice rule, President Aquino on Wednesday used the 150th birth anniversary celebration of Apolinario Mabini, one of the Philippine Revolution’s most brilliant lawyers, to turn the tables on the Supreme Court, which had declared his Disbursement Acceleration Program (DAP) unconstitutional.

Drawing from Malacañang’s motion for reconsideration filed last week, Aquino argued that the Supreme Court itself had adopted the mechanisms of the DAP to build and rehabilitate courtrooms.

He said that because the Supreme Court, “the institution with the expertise and the sole mandate to interpret the law, did it as well”—referring to a similar cross-border transfer of funds in 2012—“we became more confident that our method was correct.”

The two Supreme Court projects specifically mentioned by the President were the construction of the Manila Hall of Justice and the Malabon Hall of Justice.

Both projects were included in the motion for reconsideration filed by government lawyers last week to appeal the court’s decision declaring the DAP unconstitutional.

The sub judice rule restricts anyone from commenting or discussing pending judicial proceedings, such as the government’s appeal on the DAP ruling.

But the Supreme Court is not expected to cite the President in indirect contempt for failing to observe the sub judice rule.

Aquino explained to the nearly 1,000 guests at the Mabini celebration held at Apolinario Mabini Shrine how the Supreme Court took action for projects similar to those under the DAP.

Responding to Aquino’s statements about its own use of “cross-border” fund transfers, the Supreme Court said Wednesday that it would explain its actions through its resolutions of all the issues in Malacañang’s motion for reconsideration.

The Supreme Court also ordered the nine petitioners who challenged the legality of the DAP to comment on Malacañang’s appeal, giving them 10 days to submit their responses.

Bayan said Malacañang’s appeal “raised no new arguments” and it should be junked by the Supreme Court.

“The Palace gambit is [to prevent] the Supreme Court decision from [becoming] final and executory, which would make the impeachment proceedings [against President Aquino] premature, at least in the words of Malacañang,” Bayan secretary general Renato Reyes said.

President Aquino continued to defend the DAP without offering any new arguments, merely reiterating what he had said in his recent public speeches, weaving his pronouncements with the contributions of Mabini to nation-building, particularly the concept of public service.

Not defying the ruling

He also stressed that he did not intend to defy the Supreme Court, which he acknowledged as having the “final word” when it comes to the law.

“We have no plans of defying rulings. In truth, we are [not only] following the primary points in the decision [but] also acting in consideration of all the opinions that accompanied it,” he said.

He added: “Even then, we must never forget that, just as Apolinario Mabini said, whatever power held by any leader in any branch of government comes from the people. Thus, we are all asked to push for any and all actions that redound to the benefit of our Bosses,” referring to the people.

“This principle is why the executive branch has filed a motion for reconsideration, which includes all the arguments I have outlined today and in the past. This is a course of action our laws and systems allow us to take. This is a chance to ensure that each and every argument is evaluated carefully, so that we can avoid decisions that may adversely affect our people. The motion for reconsideration is a just act, one that follows due process. It provides a good opportunity to once again lay down all the facts on the table—ensuring that those rendering decisions have the chance to appreciate the points that may have been overlooked in the past, and the well-reasoned arguments that will strengthen all sides,” Aquino said.

“By reflecting on our history, we see how the tenets held by Mabini resonate with the present. These past few weeks, there have been heated discussions resulting from the Supreme Court’s decision on the Disbursement Acceleration Program,” Aquino said.

He said that in July 2012, the Supreme Court earmarked P1.865 billion in savings for the construction of the Manila Hall of Justice. In fact, the President said the court held a groundbreaking ceremony for the new building.

“The problem was that the item in the budget for this project was under the Department of Justice (DOJ). It is clear then: The judiciary’s money was earmarked for a project that was supposed to be undertaken by the executive,” Aquino said.

Justice Secretary Leila de Lima was seated a few meters away from the President on the stage.

Aquino said that in the same year, the DOJ had a P100-million budget for the Manila Hall of Justice. He said he received a letter from the Supreme Court and read to his audience the resolution attached to it:

“Wherefore, the court hereby requests the Department of Budget and Management to approve the transfer of the amount of P100 million which was included in the Department of Justice – Justice Infrastructure Program for Fiscal Year 2012 budget for the Manila Hall of Justice to the budget of the judiciary, subject to existing policies and procedures, to be used for the construction of the Malabon Hall of Justice.”

The President stressed that the Supreme Court asked the transfer of the funds to build the courthouses. He said he saw nothing wrong with it, as he knew that it would help in the faster dispensation of justice in the country.

He noted, however, that the Supreme Court withdrew its request in December 2013, “when the discussions surrounding the DAP had intensified.”

“Even from these examples alone, it is clear that they intended to do a cross-border transfer, or a transfer of funds from one branch of government to another,” the President said.

For the people’s benefit

Aquino emphasized that the executive branch was concerned with only one thing: That the projects would benefit the people.

“You might notice that, in all these examples, the executive branch did not initiate or offer anything. We never wished to involve ourselves in the jurisdiction or exclusive responsibilities of other branches of government; we never asked for anything in return. The only question we asked ourselves was: Would this benefit our people? If it would help, why should we oppose an opportunity to hasten the delivery of services to our Bosses?

“Again, let me make it clear that the point of the DAP is to bring service to the people at the soonest time following the correct processes. We are making the most of the people’s money to alleviate the hardships of the Filipino,” Aquino said–With a report from Tarra Quismundo