THE FALLEN 107-year-old tree dwarfs students of Bicol University in Legazpi City in Albay province who are returning to school following the onslaught of Typhoon “Glenda.” MARK ALVIC ESPLANA

NAGA CITY, Philippines—Standing under a tarpaulin streamer of a soft drinks company, which she borrowed to use as a tent from her neighbor here in Barangay (village) Sta. Cruz, Antonette Villamora, 40, recalled how she lost her house when Typhoon “Glenda” hit Camarines Sur on July 15.

“My little kids and I were huddled on the lower bed of our double deck when I felt the wind lifting us off the floor,” she said.

Villamora said the winds uprooted her house, sending its walls, which were made of light wooden materials, and iron-sheet roof, flying above the electric post across the street.

She stood over the items, which the family managed to save after the storm, while her husband Francisco, a window installer, was cutting glass nearby for a work project.

Now, their home has been reduced to a heap of wet pillows, mattresses, clothes and her collection of books. Some books are missing, but all are damaged. They were the first things she wants to restore as “they’re our only treasure,” she said. 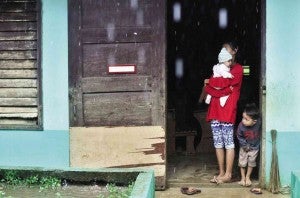 A WOMAN and her children move to this school in Magallanes, Sorsogon, at the height of Typhoon “Glenda.” MARK ALVIC ESPLANA

While waiting for help to come their way, the couple, who have seven children, are temporarily staying with neighbors and relatives.

Villamora said she was waiting for the cash assistance and materials promised by the government to rebuild their home.

The Villamoras were among the thousands of families who lost their homes to Glenda in Bicol, said a report of the Office of Civil Defense (OCD)-Bicol.

Much of the destruction was felt in Camarines Sur, where 23,401 houses were destroyed and 92,845 damaged, figures that represent around 60 percent of the total number of houses destroyed and damaged in the region.

There were 190 houses destroyed and 631 damaged in Masbate while in Catanduanes there were 98 destroyed houses and 863 damaged.

Glenda also left four persons dead in Bicol, three from Sorsogon and one from Camarines Sur. A total of 176 persons were injured.

OCD-Bicol said as of July 18, power has been restored in some parts of Camarines Sur, Albay and Catanduanes.

Efforts to restore electricity is ongoing in other parts. In Albay, only portions of Legazpi City have power back. In neighboring Daraga town, prices of candles and kerosene sold by sidewalk vendors have more than doubled.

Engineer Russell James Serrano, chief of technical operations and maintenance division of Albay Power and Energy Corp., said the utility is focused on replacing electric posts that have either been damaged or destroyed.

The timetable for complete restoration of power is at most three months.

In Albay, Gov. Joey Salceda ordered the adoption of the “Plan for Glenda Early Recovery and Reconstruction,” or Pagerr, to initiate postdisaster programs for the province.

Areas that declared a state of calamity were Polangui, Tabaco City in Albay province; Tigaon, Bula and Naga City in Camarines Sur; Sorsogon City, Casiguran and Prieto Diaz in Sorsogon province; and Virac and Catanduanes province.

‘I have tears!’ Gordon emotional as he opposed freeport zones in CREATE bill