MANILA, Philippines—It was a bicycle ride apparently meant to more than just promote the health of Cabinet members. It may also have been a Palace way of easing former Sen. Mar Roxas into the President’s official family.

For the first time since President Benigno Aquino III last week confirmed that he was appointing his former running mate as Palace chief of staff, the President appeared together in public with Roxas and Executive Secretary Paquito Ochoa Jr. 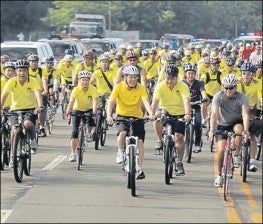 Biking with the President were other members of his Cabinet, more prominently Ochoa and Roxas, both known to belong to rival factions.

Roxas heads the so-called Balay House group while Ochoa is linked to the Samar House which, in turn, is said to be led by the group of Vice President Jejomar Binay.

The two factions have remained at odds since last year’s election campaign in which Binay beat Roxas to win the vice presidency.

Binay was not around. His aides said the Vice President was on a private engagement in Batangas.

Dr. Eric Tayag of the Department of Health said the agency had invited all government officials, including Binay, to the event.

Asked whether the presence of Roxas indicated the latter was now “in,” Communications Secretary Ricky Carandang said Roxas had previously appeared in the Palace, citing last week’s luncheon organized by Mr. Aquino for Liberty Party senators.

“I guess he’s easing himself into the job,” Carandang said of Roxas.

He stressed that Roxas would only appear at Palace functions upon the invitation of the President.

In a speech, Mr. Aquino underscored the need for people to exercise for good health.

“Health is a treasure we should give importance to and one way to take care of it is to regularly exercise,” Mr. Aquino said from a stage.

He said the nation needed healthy people so it could progress and stressed that the country was prepared to reach the “finish line.”

Mr. Aquino kicked off the program by leading a bike ride among Cabinet members and other officials, including Energy Secretary Jose Almendras and Metropolitan Manila Development Authority Chair Francis Tolentino.

Carandang said the President’s form of exercise for now was biking.

“He goes biking whenever he gets the chance,” Carandang said. “When he goes home to Tarlac, he brings his bike along.”

He also said the Presidential Management Staff was still putting the finishing touches to the administrative order defining Roxas’ functions as chief of staff.

Also joining the bike ride was Joshua Aquino, son of the President’s celebrity sister Kris Aquino, who was with other celebrities on the stage.