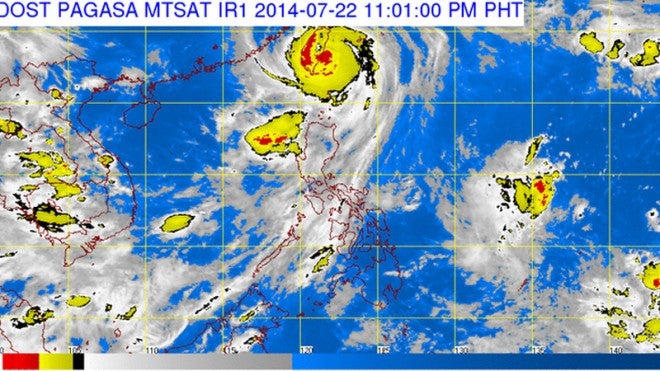 MANILA, Philippines–Typhoon “Henry” (international name: Matmo) will exit the country Wednesday morning but a new weather disturbance has been spotted east of the Visayas and will be named “Inday” when it enters the Philippine  area of responsibility, possibly on Friday or Saturday, the state weather bureau said.

As Henry headed towards Taiwan, the Batanes group of islands remained under storm warning signal No. 2, with winds of 61 to 100 kilometers per hour expected within the next 24 hours, according to the Philippine Atmospheric Geophysical Astronomical Services Administration (Pagasa).  Storm signal No. 1, with winds of 30 to 60 kph expected within 36 hours, has been hoisted over the northermost Babuyan and Calayan groups of islands.

Monsoon rains will continue to be felt in Luzon and parts of the Visayas.

No reports of casualties from typhoon Henry have been reported so far by the National Disaster Risk Reduction Management Council (NDRRMC).

A cargo vessel—the MV Seaborne Cargo 1—ran aground off Looc town in Romblon on Tuesday after encountering bad weather, according to the Philippine Coast Guard (PCG). As of press time, the Coast Guard was still trying to reach the Butuan-bound vessel, which had 22 crewmembers on board.

Meanwhile, the new low pressure area has been spotted outside the Philippine area of responsibility, or 1,300 kilometers east of the Visayas.

The potential cyclone is expected to enter the Philippine area of responsibility on Friday or Saturday, when it would be named Inday, according to weather services assistant chief Rene Paciente.

It would be the ninth typhoon to enter the Philippine area of responsibility this year, when many areas of Luzon and Eastern Visayas are still reeling from Typhoon “Glenda’s” onslaught.

Official reports from the NDRRMC so far showed Glenda has claimed at least 96 lives, with at least six more still missing and feared dead. Some 460 people were reported injured in eight affected regions.

According to Pagasa, the eye of Henry is expected to be 680 kilometers northwest of Basco, Batanes, or outside the Philippine area of responsibility by Wednesday morning.–With a report by Tina Santos