Will Aquino deliver on vow to pass FOI? | Inquirer News

Will Aquino deliver on vow to pass FOI? 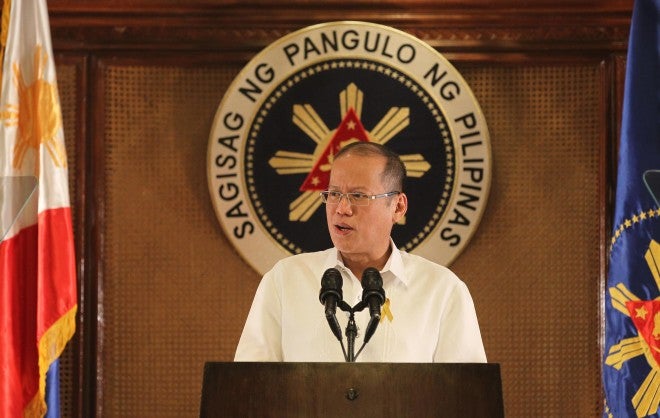 The Inquirer is running a series of articles on issues facing President Aquino in his fifth State of the Nation Address on July 28. For more on the Sona, go to http://inq.ph/sona2014.

The Freedom of Information (FOI) bills introduced since the 8th Congress do not seek to create the people’s right to information. The right is already recognized in the 1973 Constitution and further strengthened in the 1987 Constitution.

Neither are the bills intended to enable the right. The Supreme Court has long ago declared the constitutional right to be self-executing. The people can exercise the right and, if denied, can seek the court’s assistance to compel an agency to disclose the information requested.

What the proposed FOI Act seeks to do is to complement the constitutional right with substantive and procedural details for a far more effective and predictable enforcement.

The FOI bill provides a limited list of reasonable exceptions and the standard of harm necessary for the exceptions to apply, that will reduce the wide latitude of government in claiming exceptions.

It lays down a definite procedure for responding to requests. After a request is filed, the agency has no more than 15 working days to respond, unless it can prove that the information requested is covered by an exception.

It defines acts subject to administrative and criminal sanctions, providing both deterrence and accountability for violations of the right. It requires agencies to proactively publish important classes of information without need for request, establish record keeping standards, implement capacity building programs and include FOI in school curriculum. 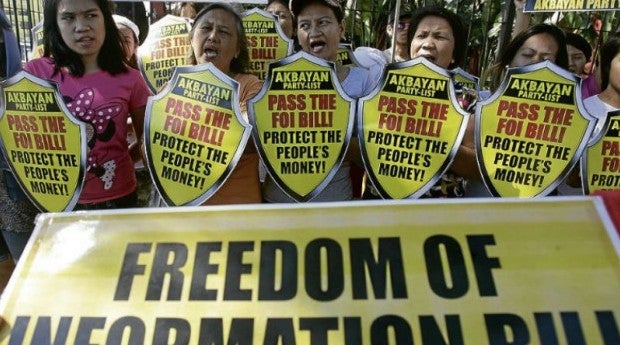 When enacted, the FOI Act can pave the way for transforming the right to information into a real power of the people to participate in decision-making, to secure related rights and to make government and its officials accountable for the use of taxpayer money and the exercise of authority.

Difficulty in finding the appropriate balance on the above provisions has resulted in the protracted deliberations on FOI. However, several Congresses made possible exhaustive discussions, and stakeholders have achieved a level of consensus on key provisions. It is political resistance that continues to frustrate the passage of the FOI Act.

This is why advocates saw hope when President Aquino won on a platform of transparency and clean government, and when he declared support for FOI passage before he assumed the presidency.

The initial commitment of support, however, quickly turned into statements of concern by his administration. In a position paper submitted by Communications Secretary Herminio Coloma to the Senate and the House of Representatives in October and November 2010, respectively, Coloma cited the following concerns:

— Impact of FOI on the volume of transaction of agencies; and

— Access to transcripts and minutes of official meetings may diminish candid and open discussions by public officers.

Mr. Aquino himself, in an interview at the Asean 100 Leadership Forum in September 2011 and in the YouTube World View interview in November 2011, directly articulated his concerns. He was worried that the premature disclosure of raw information could unduly cause panic or speculation.

The President said confidentiality was important to allow full discussions in the Cabinet.

The debate, he said, was “where to draw the line,” noting that a working group was “trying to come up with that law that everybody can live with and comply with.”

The “working group” mentioned by the President was created in March 2011 to study the FOI bills. Coordinated by Undersecretary Manuel Quezon III of the Presidential Communications Development and Strategic Planning Office, it worked closely with Budget Secretary Florencio Abad and consulted other agencies.

FOI advocates under the Right to Know, Right Now! Coalition had opportunity to comment on early drafts of the study group’s proposed amendments.

On Feb. 2, 2012, Abad transmitted to the House a copy of its amended FOI bill. The proposed amendments included the phrase “national security” in exception 1 (the 14th Congress bicameral conference version confined national security to defense and foreign affairs) and introduced a new exception to address the concern over the President’s access to free and frank opinion and discussion with his closest advisers.

In turn, the safeguards were strengthened to balance the advocates’ concerns over potential abuse of exceptions. In addition to the legal presumption in favor of access, exceptions shall be strictly construed and cannot be invoked to cover-up crime, wrongdoing, graft, or corruption. Exceptions may also be waived when there is a compelling public interest in disclosure.

Not long after transmittal, the advocates’ hopes turned into frustration. When the House public information committee, then chaired by Eastern Samar Rep. Ben Evardone, refused to move, nothing more was heard from Malacañang. The result, FOI did not even reach the legislative stage it did in the 14th Congress.

With the opportunity in the 15th Congress lost, the passage of the FOI bill under Mr. Aquino now comes down to the final two years of his six-year term. Will we finally get it?

The people’s clamor for an FOI Act has been constant and consistent, and advocates see definite advance in key areas. Determined yet careful work addressed concerns raised by the executive and other stakeholders.

The Senate passed its version in record time in the 16th Congress. And while still slower than advocates would have wanted, the present House committee sets technical working group (TWG) meetings fairly regularly. We also see a growing number of FOI champions in the House who meet regularly.

After almost two years of silence, Malacañang is once again engaged. Undersecretary Quezon now regularly attends the TWG meetings. In a forum at the World Bank headquarters on April 9, presidential spokesman Edwin Lacierda announced the executive’s decision to integrate open data principles and to institutionalize the administration’s transparency initiatives through the passage of the FOI Act.

Major pieces of legislation face institutional resistance. Nobody will go public refuting the need for and importance of FOI. But the instinct for political exigency and survival runs deep. A major reform like FOI requires decisive leadership at the highest level to overcome the legislative hurdle.

This is where the President’s assurance that the proposed FOI Act will be passed before the end of his term, made during the Daylight Dialogue in Malacañang on July 15, is significant.

Are we finally seeing a victory for FOI? The positive developments indicate a fighting chance. However, we have seen close calls before. The nonpassage of the bicameral committee report during the last day of session of the 14th Congress is a vivid reminder that nothing is sure until it is signed.

The jury is still out on FOI under the Aquino administration. Is there political courage to see it through?

(Editor’s Note: Lawyer Nepomuceno Malaluan is coconvenor of the Right to Know, Right Now! Coalition, a network of more than 100 organizations from different sectors that is at the forefront of the campaign for the passage of an FOI Act. He is a trustee at the Action for Economic Reforms and codirector of the Institute for Freedom of Information.)

For more on the series of issues on SONA 2014, read the Philippine Daily Inquirer and tune in to Radio Inquirer 990Am from 6 a.m. to 9 a.m.