NEW YORK—The leader of the International Monetary Fund (IMF) and a strong contender for the French presidency was taken off a Paris-bound jetliner at Kennedy International Airport on Saturday afternoon and arrested in connection with the violent sexual assault of a chambermaid at a Manhattan hotel. 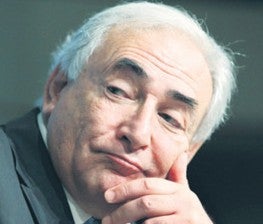 IMF Managing Director Dominique Strauss-Kahn, 62, was apprehended by detectives of the Port Authority of New York and New Jersey in the first-class section of the Air France plane at 4:40 p.m. and was turned over to the New York Police Department (NYPD) for questioning.

Strauss-Kahn, who was widely expected to become the French Socialist Party’s presidential candidate, was formally arrested at 2:15 a.m. on Sunday on charges of criminal sexual assault, attempted rape and unlawful imprisonment.

A lawyer representing Strauss-Kahn, Benjamin Brafman, told Reuters in an e-mail that the IMF chief “will plead not guilty.” Brafman made no further comment while his client awaits arraignment in a police holding cell.

NYPD spokesperson Paul J. Browne said it was about 1 p.m. on Saturday when the 32-year-old chambermaid entered Strauss-Kahn’s suite— Room 2806—at the luxury Sofitel hotel near Manhattan’s Times Square.

Browne said the chambermaid had been told to clean the spacious $3,000-a-night-suite suite, which she thought was empty. He said the suite that Strauss-Kahn had been occupying since Friday had a foyer, a conference room, a living room and a bedroom.

As the chambermaid was in the foyer, “he (Strauss-Kahn) came out of the bathroom, fully naked, and attempted to sexually assault her,” Browne said. “He grabs her, according to her account and pulls her into the bedroom and onto the bed.”

Struass-Kahn locked the door to the suite, Browne said. “She fights him off and he then drags her down the hallway to the bathroom, where he sexually assaults her a second time,” he added.

In her account to the NYPD, the woman said Struass-Kahn forced her to perform oral sex on him inside the bathroom and tried to remove her underwear.

According to the woman, she was able to break free again, escaped the room and told other hotel personnel what had happened. The hotel staff called 911.

When NYPD detectives arrived moments later, Strauss-Kahn had already left the hotel, leaving behind his cell phone. “It looked like he got out of there in a hurry,” Browne said.

Upon learning that Strauss-Kahn was at the airport, the NYPD contacted port authority officials, who plucked the IMF chief from Air France Flight 23 just 10 minutes before its scheduled takeoff.

The NYPD took the maid to Roosevelt Hospital where she was treated for minor injuries. A spokesperson for the hotel said its staff was cooperating in the investigation.

An NYPD official said the investigation had uncovered forensic evidence that would contain DNA.

Browne said Strauss-Kahn did not have diplomatic immunity. If convicted of all charges, Struass-Kahn faces a minimum 33 years in prison.

William Murray, a spokesperson for the IMF in Washington, said the agency had no immediate comment. Strauss-Kahn’s offices in Paris couldn’t be reached when the news broke overnight in France, nor could French Socialist Party officials.

The arrest has prompted the cancellation of the talks scheduled on Sunday in Berlin between Strauss-Kahn and German Chancellor Angela Merkel. The two were supposed to discuss aid to debt-laden Greece, and then join EU finance ministers in Brussels on Monday and Tuesday.

The IMF is responsible for one-third of Greece’s existing loan package, and the expected presence of Strauss-Kahn at these meetings underlined the gravity of the Greek crisis.

Although Strauss-Kahn had received generally high marks for his stewardship of the IMF, his reputation was tarnished in 2008 by an affair with a Hungarian economist who was a subordinate at the agency.

The IMF board decided to stand by Strauss-Kahn despite concluding that his actions were “regrettable” and “reflected a serious error of judgment.”

And even though the IMF board found the relationship consensual, Strauss-Kahn issued an apology to IMF employees and to his wife, Anne Sinclair, a US-born French television journalist.

“While this incident constituted an error in judgment on my part, for which I take full responsibility, I firmly believe that I have not abused my position,” Strauss-Kahn wrote in an e-mail to the IMF staff.

The economist, Piroska Nagy, left the IMF as part of a buyout of nearly 600 employees instituted by Strauss-Kahn to cut costs. She later took a job with the European Bank for Reconstruction and Development.

The arrest of Strauss-Kahn will be a worldwide embarrassment to the IMF, which has authorized billions of dollars in lending programs to troubled countries and has played a major role in the euro zone debt crisis.

Strauss-Kahn took over as head of the IMF in November 2007 for a five-year term that was scheduled to end next year. The 187-nation lending agency is headquartered in Washington and provides help in the form of emergency loans for countries facing severe financial problems.

Strauss-Kahn won praise for his leadership at the IMF during the financial crisis of 2008 and the severe global recession that followed.

More recently, he has directed the IMF’s participation in bailout efforts to keep a European debt crisis which began in Greece from destabilizing the global economy.

No matter the outcome of Saturday’s arrest, it will most likely throw the French political world into turmoil and the Socialist Party into an embarrassed confusion.

Strauss-Kahn, a leading member of the party, has been considered the front-runner for the next presidential election in France in May 2012.

Opinion polls have shown him to be the Socialist Party’s most popular candidate and running well ahead of the incumbent, Nicolas Sarkozy, who leads the center-right party.

France has been waiting for Strauss-Kahn to decide whether to run for his party’s nomination in a series of primaries, which would mean giving up his post at the IMF.

Strauss-Kahn contested his party’s presidential nomination five years ago but lost to Segolene Royal, who in the end lost a second-round runoff to Sarkozy.

Sarkozy then arranged for Strauss-Kahn to get the IMF job, partly to remove a popular rival from the French political landscape.

Strauss-Kahn was the French minister of economy under Socialist Prime Minister Lionel Jospin from 1997 to 1999 after a stint as professor of economics at the prestigious Paris Institute for Political Studies.

In 1995, he was elected mayor of Sarcelles, a poor suburb of Paris, and married Sinclair.

The couple are known for their enjoyment of the finer things in life, and Strauss-Kahn has sometimes been attacked for being a “caviar leftist.”

Strauss-Kahn and his wife were photographed recently getting into an expensive Porsche in Paris belonging to one of their friends. The image of a socialist with “Porsche” tastes was quickly picked up by the press, especially the newspapers that generally support Sarkozy. Reports from the New York Times News Service, AP and Reuters