MANILA, Philippines—One of the alleged incorporators of a bogus nongovernment organization established by Janet Lim-Napoles has asked the Sandiganbayan to dismiss the graft case filed against her in connection with the P10-billion pork barrel scam. 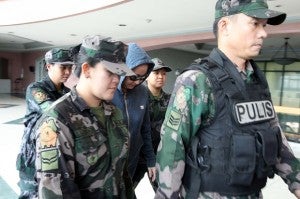 Claiming the Office of the Ombudsman had erred in indicting her, Myla Ogerio also sought the lifting of the warrant for her arrest issued by the antigraft court’s Third Division.

In addition, Ogerio petitioned the court for a reinvestigation of the case because “what constituted the basis of probable cause … is significantly wanting.”

Ogerio was one of the registered officers of Agri and Economic Program for Farmers Foundation Inc. (AEPFFI) which allegedly received millions of pesos from the pork barrel, or Priority Development Assistance Fund (PDAF), of Sen. Juan Ponce Enrile.

In a motion filed on July 17 by her lawyer Dominic Garen, Ogerio said she was unaware that her name had appeared as an incorporator of a fake NGO that Napoles and her alleged accomplices had used to divert the public funds into their own pockets.

In her petition, Ogerio said the finding of probable cause against her by the Ombudsman and the Sandiganbayan was “contrary to the statements made by the PDAF whistle-blowers, the law and existing jurisprudence.”

She denied being a former employee of JLN Corp., noting that her name did not appear in any of the records of the company owned by Napoles.

To support her claim of innocence, Ogerio submitted a joint affidavit of Luy and the other witnesses—Marina Sula, Mary Arlene Baltazar, Merlina Sunas and Simonette Briones.

In their affidavit dated June 18, the whistle-blowers said they wrote down the names of their relatives and friends in the incorporation documents of several bogus NGOs on the instructions of Napoles.