Giving another chance to dropouts 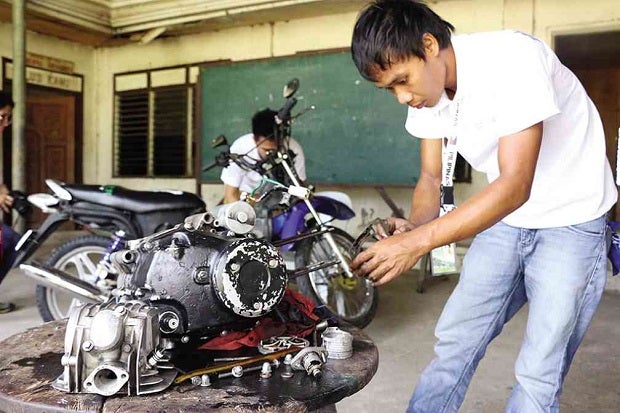 He dropped plans of going to college after graduating from high school in Datu Hoffer town in Maguindanao, one of the poorest provinces in the country, but Rasul Alon still found a way to improve his prospects.

Alon, 24, lives in Sitio Kusan in Barangay Labu-Labu, with a population of barely 200, that is just a stone’s throw away from a small camp of Moro insurgents belonging to the Bangsamoro Islamic Armed Forces. The villagers, however, are waging a war against poverty, like in many other places in the country.

After high school, Alon had to stop studying to support his mother and three younger siblings, even plans to start his own family. His father had abandoned them.

Alon has been tilling a rented farmland, while his mother weaves and sells “atep” (cogon grass for hut walls). Their earnings, however, are not enough to sustain the family throughout the year.

To augment his income, Alon drives a rented “payong-payong” (tricycle with an umbrella over a sidecar). On a good day, he earns P300, but good days do not come often, so he must find another alternative job.

One day, while plying his route, he chanced upon a leaflet of the Technical Education and Skills Development Authority (Tesda), a government agency offering skills training. A P300 fee will be collected and classes will be held in the city.

Alon knew this was what he needed despite the travel expense, so he made plans to save up for the training.

As luck would have it, a representative from Basic Education Assistance for Mindanao in the Autonomous Region in Muslim Mindanao (BEAM-ARMM), a program of the Australian Embassy and the Department of Education in the ARMM, arrived in Alon’s village to offer free technical-vocational education and training for out-of-school youths in the hut of the barangay captain.

Alon and 35 others signed up to study “consumer electronics” as they would be able to repair television sets and other simple appliances in the village. About a third of the enrollees were women, but a number dropped out, including a woman who had to attend to her sickly child.

Alon stayed and did well. Even before the 35-day training ended, he was already earning extra money from repairing appliances on house calls, using tools borrowed from the program. Now, he earns at least P500, nearly twice his previous income.

“It’s not hard to repair appliances,” he says. “Many times, I just turn on the TV set  and I’d know what’s wrong with it. I explain it to the owner and tell him what part is needed and how much it costs, and he often gives me the money to buy it myself. I make sure to ask for an OR (official receipt) so the owner will know I’m not fooling him. I charge about P150 on the average for repairing a TV set.”

When he completes the course, he will receive his own toolkit from the program.

Alon knows that his income from repairing appliances is not stable. So he wants to take up another BEAM-ARMM course, like small engine repair, to broaden his options.

He is bent on passing the government test so he can be awarded a certificate of competency. That document will open more doors for him—land a job, put up a shop with his co-trainees so they could tap a bigger market, work abroad or be a Tesda trainer.

He will settle for a decent-paying job near his home. “I want to stay with my family,” he says.

Editor’s Note: The author is a communications consultant of AusAID’s BEAM-ARMM program.