Mercury found in some skin whiteners 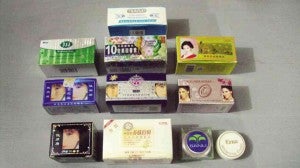 Samples of the beauty products that tested positive for high levels of mercury and that were bought in stores in Manila, Parañaque and Pasay. EcoWaste Coalition/CONTRIBUTED FILE PHOTO

MANILA, Philippines—An environmental watchdog warned the public against buying whitening products supposedly from the US, China, Japan and Taiwan which are laced with mercury and are being sold in retail shops around Manila and Quezon City.

Nine of the 12 products that the EcoWaste Coalition tested for mercury have been banned by the Food and Drugs Administration while three still have no accreditation from the agency.

According to the EcoWaste Coalition, mercury in the cosmetics stops the production of melanin (a natural pigmentation that gives the skin its color), artificially resulting in fairer complexion.

EcoWaste coordinatior Aileen Lucero said, “Consumers should be cautious of deceptive claims as some cosmetics that promise flawless and lighter skin tone contain undisclosed amounts of toxic mercury, which can damage the kidneys and the skin itself.”

The whitening products  found to have high levels of mercury by as much as 51,000 parts per million   were bought July 13-15 by the group mostly from Chinese drugstores which sold them at prices ranging from P80 to P200.

The group pointed out that with the exception of the two BG products and the Feique cream, nine have already been banned by the FDA.

Lucero said that the “BG” line of whitening cosmetics, supposedly manufactured in New York, claims to contain “ten kinds of precious herbal medicines” and alleges that its “gentle formula keeps your skin soft like a child.” Each, she said, was sold at P120 at the Pan Pacific Chinese Drug Store at the 999 Shopping Mall in Manila and still do not have market authorization from the FDA.

Under the Association of Southeast Asian Nations Cosmetics Directive, the permissible limit for mercury in cosmetics is just 1 ppm.

Apart from their long-term effects, the World Health Organization has warned that mercury-laden skin lightening products can also cause skin rashes, discoloration, and scarring as well as reduction in its resistance to bacterial and fungal infections.

“Innocent children can ingest the toxic metal by hugging or kissing adults who use these creams,” Lucero pointed out.