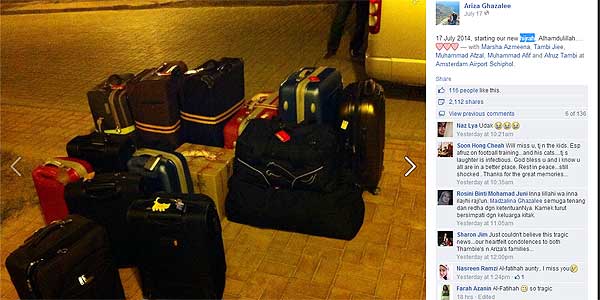 KUALA LUMPUR–An entire family of six that had been returning home after three years living abroad was among the 44 Malaysians killed in the MH17 disaster, media reports said Saturday.

Tambi Jiee, 49, and his wife Ariza Ghazalee, 46, perished along with their four children when the Malaysia Airlines flight went down in eastern Ukraine.

They were reportedly returning to Malaysia after her husband’s three-year posting in Kazakhstan for energy giant Shell, first taking a short European holiday.

“I lost my daughter and her family in a blink of an eye,” the New Straits Times quoted her as saying from her home in the eastern Malaysian state of Sarawak on Borneo island.

Ariza had posted a photo on Facebook showing the family’s luggage as they prepared to embark from Amsterdam’s Schiphol airport for the flight to Kuala Lumpur.

Her 17-year-old son Afzal Tambi also posted his thanks and farewells to friends from Kazakhstan on Thursday.

“Before it gets too cheesy, I just want to thank everyone who made it bearable for me to live here and for sharing with me amazing memories to reminisce on.”

The Boeing 777 came down with 298 onboard in a separatist-held region of Ukraine, with the United States claiming it was shot down in a missile attack, a possible casualty of the Kiev government’s battle with pro-Russia rebels.

The disaster has deeply shocked Malaysia, which is still grappling with the trauma of the March 8 disappearance of MH370 with 239 passengers and crew aboard, including 38 Malaysians.

No trace of the MH370 plane has been found, a mystery that has severely damaged Malaysia’s image abroad and left furious passengers’ relatives deeply anguished and demanding answers. 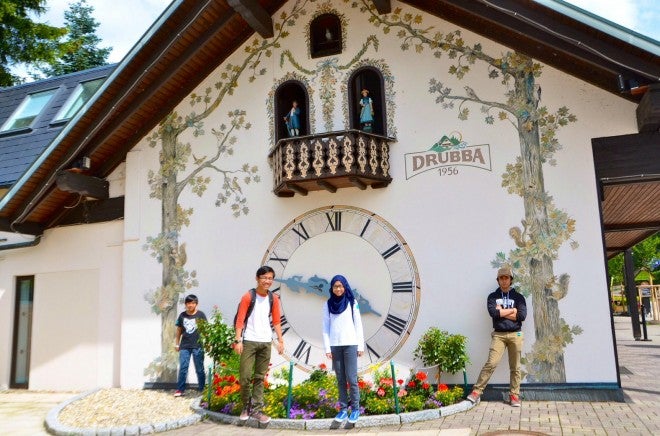 The children pose for a photograph in Lake Titisee, Germany

Read Next
Top AIDS official says six colleagues on Malaysia plane, not 100
EDITORS' PICK
Look Through: The fate of impounded stray dogs
House energy committee chair Arroyo bats for cheap electricity
What to watch out for when selecting a video surveillance solution
23,000 cops to be deployed nationwide for school reopening
Unleash the photographer in you this World Photography Day with vivo smartphones
DOH says COVID-19 cases plateauing, but public shouldn’t be ‘complacent’
MOST READ
Sharon Cuneta asks for prayers for friend in ICU who suffered silent stroke
Korina Sanchez reunites with former ABS-CBN co-anchors Julius Babao, Cheryl Cosim
Light therapy could be the answer to your sleep problems
Solons file resolutions seeking probe on ABS-CBN, TV5 merger
Don't miss out on the latest news and information.