US: Can’t rule out Russian role in plane downing 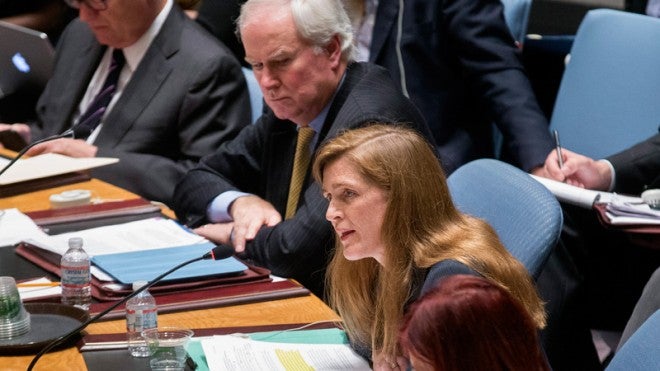 UNITED NATIONS- United States Ambassador Samantha Power told an emergency meeting of the U.N. Security Council on Friday that the United States cannot rule out that Russia helped in the launch of the surface-to-air missile that shot down a Malaysia Airlines jet over eastern Ukraine, killing all 298 people on board.

Power said the U.S. believes the plane was likely downed by an SA-11 missile fired from an area in eastern Ukraine controlled by pro-Russian separatists. She said Russia has provided SA-11s and other heavy weapons to the separatists.

Britain’s U.N. Ambassador Mark Lyall Grant, who called the emergency meeting, was more emphatic on assessing blame for the crash.

“It is clear where responsibility lies: with the senseless violence of armed separatists and with those who have supported, equipped and advised them,” he said. “The council must be united in condemning these actions, and in demanding that these groups disarm, desist from violence and intimidation and engage in dialogue through the democratic mechanisms that are available to them.”

The Malaysian jet was flying at a cruising altitude of 33,000 feet (10,000 meters) from Amsterdam to Kuala Lumpur on an established flight corridor when it was shot down Thursday, Power said.

Power said that early Thursday a Western reporter reported an SA-11 system in separatist-controlled territory near Snizhne, “and separatists were spotted hours before the incident with an SA-11 SAM system close to the site where the plane came down.” Power didn’t identify the reporter. But on Thursday, AP journalists saw a rocket launcher near Snizhne.

“Because of the technical complexity of the SA-11, it is unlikely that the separatists could effectively operate the system without assistance from knowledgeable personnel. Thus, we cannot rule out technical assistance from Russian personnel in operating the systems,” she said.

Power said Ukraine also has SA-11 missiles but the United States is not aware of any in the area where the plane was shot down.

She said the downing of the Malaysian airlines jet also follows a pattern of attacks on aircraft by the separatists in June and very recently on Monday and Wednesday.

“If indeed Russian-backed separatists were behind this attack on a civilian airliner, they and their backers would have good reason to cover up evidence of their crime,” Power told the council. “Thus it is extremely important than an investigation be commenced immediately.”

Power called for a cease-fire by Russia, pro-Russian separatists and Ukraine so investigators can immediately get to the site.

Russia’s U.N. Ambassador Vitaly Churkin did not respond to the U.S. allegations but called for an international commission to investigate the crash.

He asked why Ukraine allowed civilian aircraft to fly over an area where military clashes and airstrikes were taking place, and where anti-aircraft systems were operating, and called on investigators to also determine whether Ukraine met its international obligation to ensure the safety of the flying public and “prevent disasters from occurring.”

“Today, Kiev declared a full closure of the airspace in the conducting of the so-called anti-terrorist operation,” Churkin said. “Why couldn’t this have been done earlier, not later when (there were) hundreds of victims?”

Ukraine’s U.N. Ambassador Yuriy Sergeyev reiterated that the downing of the Malaysian airliner would not have happened if Russia did not provide sophisticated anti-aircraft systems to the rebels.

He said that intercepted telephone conversations between rebel leaders and a Russian military intelligence colonel “confirms the terrorists are standing behind this crime,” stressing that immediately after the crash, a rebel military leader boasted in social media of shooting down what he thought was a Ukrainian jet.

Sergeyev said communications and intercepts, photos and videos indicate that the rebels have at least two SA-11 missile systems, also known as Buk. He added that detained “terrorists,” including two Russian citizens who were going to join the rebels, confessed that the Buk system arrived from Russia.

The entire Security Council called for “a full, thorough and independent international investigation, in accordance with international civil aviation guidelines, and for appropriate accountability.”  It stressed the need for “immediate access by investigators to the crash site to determine the cause of the incident.”

At the start of Friday’s emergency meeting, all diplomats in the crowded council chamber rose to their feet and bowed their heads in silent tribute to those who died.

Ambassadors from all countries with passengers on the flight — Netherlands, Malaysia, Australia, Indonesia, United Kingdom, Germany, Belgium, Philippines, Vietnam, Canada, New Zealand and the United States — all spoke, demanding an independent investigation and calling for the perpetrators to be brought to justice.

U.N. Secretary-General Ban Ki-moon offered the “full cooperation” of the U.N. in an international investigation, saying it must be “full and transparent” and anyone responsible must be brought to justice, U.N. deputy spokesman Farhan Haq said. Ban said the International Civil Aviation Organization has offered to put together an international team.

Late on Friday night, the ICAO announced in a news release that it would in fact send a team to the Ukraine at the request of the Ukrainian government to assist in the official investigation into the downed plane

U.N. political chief Jeffrey Feltman, who briefed the council, expressed hope for “a serious and sustained effort to end the fighting and concentrate positively on Ukraine’s future.” He said Ban has asked him to return to Kiev and Moscow in the coming days to promote peace efforts.