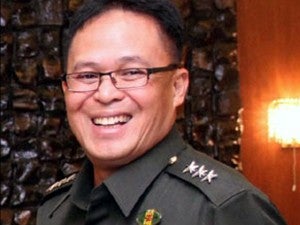 The new Chief of Staff of the Armed Forces of the Philippines appointed by President Benigno Aquino believes the biggest threat to the country is not armed. It is climate change.

A Philippine Daily Inquirer source said Catapang had the necessary qualities to lead a military that is facing unique challenges.

He described Catapang as an officer who recognized the need to address nontraditional threats like climate change.

“He’s focused on HADR (humanitarian assistance and disaster response). He believes that the biggest threat to us now is not the armed threat but climate change and the disaster it brings,” the source added.

Catapang, who was the AFP vice chief of staff, was a classmate of Bautista at the Philippine Military Academy. They both belong to the PMA “Dimalupig” Class of 1981.

A testimonial parade and review will be held tomorrow at the AFP general headquarters in honor of Bautista, who turns 56 on July 20, the mandatory retirement age in the military.

The change of command ceremony, to be presided over by President Aquino as the Commander in Chief, will follow the testimonial parade, the AFP public affairs office said in a statement.

Catapang will have only about a year to serve as AFP chief as he will himself reach retirement age next July.

When the post of Army chief fell vacant earlier this year, it was widely believed that Catapang would get it, but Lieutenant General Hernando Iriberri, a member of PMA Class of 1983, got the appointment.

Iriberri’s appointment as Army commander spurred rumors that Catapang was being groomed to succeed Bautista.

In May, Catapang was appointed AFP vice chief of staff.

“As vice chief, he was given the opportunity to look into various programs, especially on the AFP modernization, territorial defense, the IPSP (Internal Peace and Security Plan) Bayanihan,” a military source said.

Like his mistah and predecessor, Catapang will lead a military that now has to give equal attention to territorial and internal defense.

The military also has the responsibility of protecting Philippine-claimed territories in the disputed Spratlys achipelago, including Ayungin Shoal, which China also claims for itself.

Even with its minuscule resources, the AFP has also been at the forefront of humanitarian assistance and disaster response during calamities.

Catapang has received several awards such as the Gold Cross Medal for his exploits as a combat officer, though he is better known in the military for his campaign against climate change.

He was “instrumental in the normalization of Northern and Central Luzon” during his term as commander of Nolcom and 7th ID, the AFP said.

He was given recognition for his contribution to the relief operations for the survivors of Tropical Storm “Ondoy” in 2009. At the time, he was assigned to the Office of Civil Defense.

As a junior officer in the early 1980s, Catapang joined the Reform the Armed Forces Movement (RAM), an organization of junior military officers that played a crucial role in the mutiny that spurred the Edsa People Power Revolution of 1986.

Who will be next Army chief? Catapang, Iriberri among contenders