The other popular food treat of Tayabas City 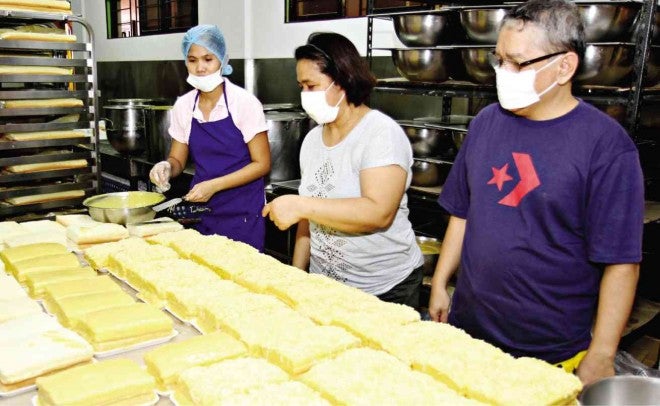 When Juliet Rodilla won P20,000 from a community-based numbers game a decade ago, she used the money to buy basic tools to start a bakeshop in Tayabas City at the foot of Mt. Banahaw in Quezon province.

Now she and her husband, Vincent, both in their late 40s, have become popular for creating a sinful concoction that the city is proud of, aside from the tasteful cassava pudding called budin.

The Rodillas’ yema cake is fast catching up as an irresistible, mouth-watering dessert among food lovers. It consists of two layers of sponge cake covered with yellow icing, made from condensed milk and egg yolk with liberal sprinklings of grated cheese.

Juliet learned how to bake after graduating from high school in 1982 while working briefly in a nutritionist’s household and as cake maker in Lucena City.

“At first, I was only observing my employer while she (was) baking. But later, especially when she’s on duty at the hospital and there was an order, she often asked me to do the mixing and baking,” she says, recalling how her fascination with cupcakes, muffins, cookies and other sweet baking products began.

Her romance with baking, however, lasted for only a year. She entered college and finished an accounting course in 1988. Two years later, she and Vincent got married.

For three years, the couple ran a small eatery from their rented house in Tayabas while taking care of two children. Still, Juliet found time to take a refresher course on baking. Vincent, in the meantime, took a vocational course on cake making and even specialized on designing wedding cakes.

Vincent’s brother, who was working in Saudi Arabia, gave extra capital for the Rodillas’ bakeshop and asked them to set it up at his newly constructed but vacant house, also in Tayabas. The couple began accepting made-to-order cakes, and produced cupcakes and brownies which they sold in schools.

In 1997, they rented a small space at the center of town, hoping to attract more buyers, particularly, to try their yema cake. The business, however, failed to take off and was shuttered in 2005, forcing them to return to their home base.

To help settle their mounting debts, Juliet flew to Hong Kong to work as a domestic helper while Vincent continued baking, pursuing his fascination with yema cake.

“I knew back then that there was still something missing with its taste. My goal was to find that … and eventually perfect it,” Vincent said.

Juliet described her partner’s passion to create the most delicious cake as a “perpetual trial-and-error affair.”

The hard work finally paid off in 2008 when buyers started coming in.

Sometime in 2010, Vincent convinced Juliet to return home to help in the thriving bakeshop. The first thing that his wife did when she went back was to have a bite of the yema cake she dearly missed.

“I was surprised. The cake was smooth and soft. The mouth-watering icing was deliciously melting in every bite. The taste was really satisfying,” Juliet said.

Thus, Monica and Jett Bakeshop was born and registered with the Department of Trade and Industry. It was named after their two children.

With the yema cake as solo product, the family bakeshop experienced a dramatic spike in sales. Now, it can hardly meet demand from buyers from as far as Metro Manila and neighboring provinces, Juliet said.

“We don’t have our own outlets. Most of the existing outlets in Tayabas and neighboring towns were put up by Vincent’s relatives,” Juliet said. Most of the resellers have enjoyed brisk sales, especially during fiestas and holidays, and have maintain online advertisement.

All their helpers, contractual and regular, come from their neighborhood. The couple also buy raw materials—eggs, flour, sugar and milk—from many sources in their hometown.

“I have six egg suppliers. I want to share the good blessings by helping more local businesses,” Juliet said.

Rodillas’ small yema cake in a four-by-six-inch box sells for P135 and the big one (8×12) for P250. Shelf life is three days under room temperature but once refrigerated, it can last for a week.

Juliet’s advise to buyers: Do not leave the cake under direct sunlight or “the icing will melt quickly.”

A trusted relative takes charge of the sponge cake production, but the icing formula is a family secret that only the couple and their children know. Their children, now in their 20s and both culinary arts graduates, help run the business.

Other bakeshops in Tayabas, Lucena City and neighboring towns have joined the bandwagon and started selling their own versions of the popular cake. “But they can never imitate the original,” Juliet said.

The couple has plans to build a bigger production house to meet rising demand.

“The funny thing is most of our buyers just remember Rodillas’ yema cake, but they barely know the name of the bakeshop behind it,” Juliet said.