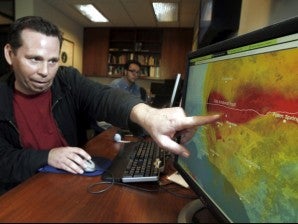 This Sept. 13, 2011 photo shows Anthony Guarino Jr., a seismic analyst at the California Institute of Technology, demonstrating an early earthquake warning system in Pasadena, California. The US government has been testing an alert system in California that may someday warn residents and businesses that an earthquake has hit. It's still in the test phase and only about 30 scientists have been hand-picked to receive the warnings. The project is headed by the US Geological Survey based on computer code developed by the California Institute of Technology and University of California, Berkeley. AP

PASADENA, California – Elizabeth Cochran was sitting in her office when her computer suddenly sounded an alarm.

A map of California on her screen lit up with a red dot, signaling an earthquake had struck. A clock next to the map counted down the seconds until shock waves fanning out from the epicenter north of Los Angeles reached her location in Pasadena: 5-4-3-2-1.

Right on cue, Cochran felt her chair quiver ever so slightly from a magnitude-4.2 that rumbled through Southern California on Sept. 1.

“If I hadn’t known it was an earthquake, I would have thought it was a truck going by,” she said.

After years of lagging behind Japan, Mexico and other quake-prone countries, the US government has been quietly testing an earthquake early warning system in California since February. Cochran belongs to an exclusive club of scientists who receive a heads up every time the state shakes.

The alert system is still crude and messages are not yet broadcast to residents or businesses.

With more testing and funding, researchers hope to build a public warning system similar to the Japanese that has been credited with saving lives during the March 11 magnitude-9 disaster.

Since earthquakes are unpredictable, supporters of early warning say it’s the next best thing to prepare people and the commercial sector before the ground rocks. Even a 5-second advance notice can be precious, they contend.

“You want to get under a sturdy table before things start falling off the wall,” said University of California, Berkeley seismologist Richard Allen, a project participant. “We don’t want people to start running out of buildings.”

Early warning is designed to sense the first pulses of energy after a fault breaks and estimate the magnitude based on limited information. This is possible because of the different speeds at which seismic waves travel.

A sprawling web of underground sensors can detect the faster-moving and less damaging primary or “P” waves before the secondary “S” waves that can cause buildings to pancake. A warning is issued ahead of the arrival of the stronger waves.

How much warning – a few seconds to tens of seconds – depends on the distance from the epicenter. The farther away, the more lead time.

Project chief Doug Given of the US Geological Survey ticked off actions that can be taken: Trains can be slowed or stopped. Air traffic controllers can halt takeoffs and landings. Power plants and factories can close valves. Schoolchildren can dive under their desks and cover their heads.

Early warning is useless at the quake’s origin because the tremors radiate out almost simultaneously.

The Japanese got their big test in March when a massive quake hit off the northeast coast and spawned a tsunami. A public emergency announcement was sent out 8 seconds after sensors detected the first inkling of the quake, interrupting regular TV and radio programming, and buzzing cell phones.

Millions received 5 to 40 seconds of warning depending on how far they were from the epicenter. Tokyo – about 230 miles away – got about 10 to 30 seconds of notice before high-rises swayed. A dozen trains were stopped in their tracks without derailing.

There were glitches. Sensors underestimated the quake at a magnitude-8.1 when it was actually 22 times stronger. Because of the error, warnings were not sent to certain cities. The jolt was so violent that it knocked 55 seismic stations offline and there were no warnings sent for aftershocks for several hours.

Still, in a hearing before a House subcommittee a week after the disaster, USGS director Marcia McNutt told lawmakers the Japanese early warning system saved thousands of lives. McNutt also acknowledged the financial cloud surrounding the US effort.

“Shame on us if we do not learn from their misfortune,” she testified.

Since 2006, the US has been testing three alert systems and launched a prototype internally known as “ShakeAlert” in February, a month before the Japan devastation. For now, messages are only blasted out to about 30 scientists at the USGS, California Institute of Technology and University of California, Berkeley, where they are working out software bugs on a shoestring budget.

Where possible, the US has borrowed aspects of Japan’s warning system. Researchers said it’s not possible to just replicate it because of differences in the countries’ seismic sensor networks.

“It’s not perfect,” said Berkeley’s Allen of the US effort. “Frankly, it’s stuck together with duct tape, but it’s operational.”

The next steps are to partner with businesses to test the system in the real world later this year and work on a more robust network. The Southern California Earthquake Center, made up of 55 research institutions worldwide, has been chosen to independently rate how it’s working.

Technology hurdles aside, the work suffers from lack of funding. The USGS has spent $2 million on the project and is seeking help from private foundations and industry groups. Scientists estimate it will cost $80 million over five years to create a statewide public alert system and millions more annually to maintain it.

“That’s tough in this budget environment when there are lots of trade-offs that have to be considered,” said David Applegate, associate director for natural hazards at USGS headquarters, adding that he remained hopeful.

It’s been a long wait for Caltech engineering professor Tom Heaton, who has studied early warning for more than three decades and finally got it running in his house on his 60th birthday.

“My hope is that it happens before I die. That’s my goal,” Heaton said.

To date, the alerts only pop up on the selected scientists’ computers, which is an impractical way to warn because it depends upon being online. Scientists envision eventually broadcasting messages through TV, radio and cell phones.

Since the prototype went live, users have hardly felt any shaking because the quakes are either too weak or too distant. Occasionally, they get notice of a jolt that they care about like the magnitude-4.2 centered near Newhall, a bedroom community about 25 miles north of downtown Los Angeles.

Though a mild tremble by seismic standards, it rattled nerves across a wide swath.

Cochran, who recently left the academic world to join the USGS in Pasadena, has been running the program in the background for about a month before the Newhall rumble. She has grown used to the constant pinging whenever the ground heaves. The Newhall quake caught her interest because the countdown was short – a sign that it occurred close by.

So Cochran sat still and waited for the shaking. Had it been stronger, she would have ducked under her desk.

“It was the first time that I had gotten a warning and actually felt it,” she said.