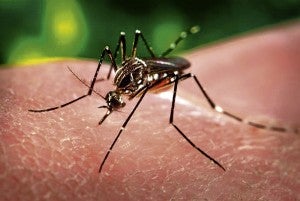 MANILA, Philippines — With an effective dengue vaccine available by July next year, the Department of Health is optimistic that two out of three patients won’t need hospitalization and that the country will get rid of the mosquito-borne disease as a major public health problem in the country in the coming years.

At a press conference Tuesday, Health Secretary Enrique Ona announced that a dengue vaccine that underwent clinical trial for more than two years has been successfully tested, showing a promising overall efficacy of 56.6 percent.

This means that the country might be able to reduce the number of dengue cases in the country by half with the help of the vaccine, Ona said.

“Finally, four days ago, it was announced on a global scale that there is now a vaccine that has been experimented, developed and found to be effective in preventing cases of dengue,” Ona told reporters.

The international pharmaceutical firm Sanofi Pasteur has announced that by 2015, its vaccines division will start applying for licenses with the health authorities of various countries. In the Philippines, the firm will provide the DOH with all the pertinent data about the vaccine and apply for a license.

The study on the dengue vaccine efficacy was performed in five Asian countries, including the Philippines, where 3,500 children in the cities of Cebu and San Pablo were given the vaccine for testing.

Ona noted that in a study of 10,275 children, more than half of the subjects did not get dengue compared to the group that did not receive the vaccine.

The study also showed that after three doses, the vaccine reduced the possibility of developing dengue  hemorrhagic fever by 88.5 percent, according to the World Health Organization criteria.

It was also noted that there was a 67-percent decline in the risk of hospitalization due to dengue during the observation period.

“This means that two out of three children that you see hospitalized due to dengue can already be avoided,” said Ona.

He said the measured efficacy of the dengue vaccine during the 25-month observation was consistent across the subject countries, which included Indonesia, Malaysia, Thailand and Vietnam, and appeared to vary by dengue serotypes between 34.7 percent and 72.4 percent.

“These results are of great public health importance due to the high incidence of dengue and its disruptive effect on the country’s health system,” Ona said.

He said on top of the DOH’s extensive anti-dengue program, the vaccine will help the government eliminate the disease as a major public health problem.

So far, the DOH has monitored a steep decline in the number of dengue cases in the country from January to July this year from last year’s 79,274 cases covering the same period. The health agency monitored 31,088 dengue cases across the country during the first seven months of the year.

“Our preventive meaures have been quite effective, hopefully. But it is still early to say because dengue season has just started,” said the health chief.

He was also quick to add that the public must not let its guard down and must continue to practice preventive measures despite the presence of an effective dengue vaccine.

“It doesn’t mean because there is already a vaccine for dengue, we will forget our program on dengue prevention,” he said.