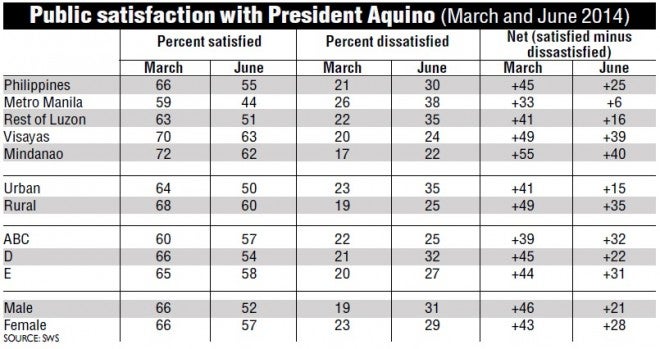 MANILA, Philippines–President Aquino’s net satisfaction rating plunged to a new low in the second quarter with double-digit dips in all geographic areas, according to the latest Social Weather Stations (SWS) survey.

The survey, conducted from June 27 to 30, also found that expectations on his success fell significantly from last year. 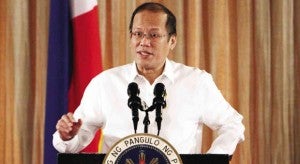 SWS noted that the President got a “very good” plus-60 rating three months into his administration and reached the record high of “very good” plus 67 in August 2012. In the 15 quarterly surveys that SWS conducted before June, Aquino’s net scores were under plus 50 only six times, it added.

In all geographic areas, net satisfaction ratings of the President hit record lows.

The President’s net rating also dropped in all socioeconomic classes. It was down from “good” plus 45 to “moderate” plus 22 in Class D. The ratings dipped among Classes ABC (from plus 39 to plus 32) and Class E (from plus 44 to plus 31) but was still considered “good.”

Among males, it was down from plus 46 to plus 21 and from plus 43 to plus 28 among females. These scores were downgrades from “good” to “moderate.”

The survey, first published in BusinessWorld, used face-to-face interviews and had a margin of error of plus-or-minus 3 percentage points.–Inquirer Research