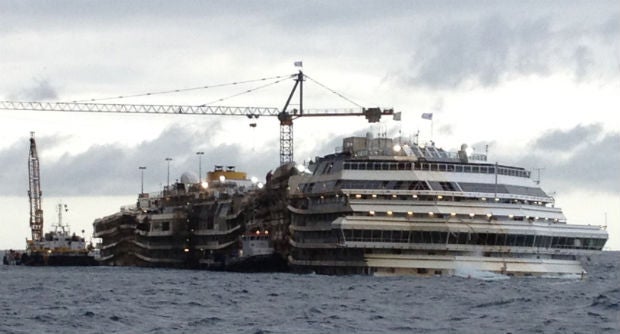 In this file photo taken on Jan. 23, 2014, the Costa Concordia cruise liner lies in the waters of the Giglio Island, Italy. AP FILE PHOTO

GIGLIO ISLAND – An unprecedented operation to refloat the shipwrecked Costa Concordia began Monday in Italy, with salvage workers attempting to raise the rusty liner from its watery grave on the shores of a rugged Tuscan island.

“I am a bit nervous,” said Salvage Master Nick Sloane as he headed out to the wreck to oversee the first-ever operation to float a ship of this size from a control room onboard the liner, two and a half years after it sank in a nighttime disaster that left 32 people dead.

Media crews from around the world crowded onto the port to see off the globe-trotting South African Sloane, who was dressed in his trademark casual blue jeans with a red life jacket over a black T-shirt.

The liner will be refloated over a six-to-seven day period and then be towed away to Genoa port in northern Italy for scrapping, where it is expected to arrive later this month.

The 114,500-ton vessel will be raised two meters (6.5 feet) on Monday off the artificial platform it has rested on since it was righted in September.

Fears of a bad turn in the weather forcing a halt to the operation before it began were quelled as the rain cleared at dawn and tug boats carrying divers and engineers sped out to the Concordia to be on hand for emergencies.

Air will slowly be pumped into 30 tanks or “sponsons” attached to both sides of the 290-meter Concordia to expel the water inside and raise the ship.

It will then be towed away from the shore and moored using anchors and cables. Thirty-six steel cables and 56 chains will hold the sponsons in place.

“The risks are that the ship could bend as it is raised, or the chains underneath it could snap,” Sloane told AFP before the operation.

“There will be 42 people on board during the first manoeuver. If disaster strikes we will evacuate through emergency escapes on the bow and stern,” he said.

The whole operation is expected to take around six hours.

If all goes well, all the sponsons would be lowered into position on Tuesday and Wednesday.

“That will be the point of no-return,” senior engineer Franco Porcellacchia told reporters on the island on the eve of the operation.

The main refloating operation is set to take place between Thursday and Saturday, when air will be pumped into the tanks to raise the ship and the emerging decks will be cleared of any debris and checked for structural damage.

Final checks will then be carried out before the Concordia it dragged off on its final Mediterranean journey.

The area is in one of Europe’s largest marine sanctuaries- a haven for dolphins and whales- and environmentalists have warned about the dangers of toxic waste or fuel leaking into the sea as the ship is raised and towed.

“It’s an unprecedented operation and, as with anything being done for the first time, there are risks. But we are confident,” Porcellacchia said.

The Concordia- twice as big as the Titanic- crashed off Giglio on the night of January 13, 2012, forcing many of its 4,229 passengers and crew from 70 countries to jump into the sea as lifeboat pulleys failed.

The ship’s captain Francesco Schettino is on trial for manslaughter, causing a shipwreck, and abandoning the vessel before all passengers had evacuated.

Four other crew members and a Costa Crociere executive have plea-bargained and the company has accepted limited responsibility as Schettino’s employer.

On the night of the disaster, survivors were fed and clothed by locals, with many taking shelter in the tiny church facing the port, where priest Lorenzo Pasquotti led a solemn service on Sunday evening in memory of the victims.

The body of Indian waiter Russel Rebello is still missing and there will be a search for his remains during the refloating.

Local residents said they would be watching anxiously.

“We really hope it’s going to go well. If, God forbid, the ship does sink, I only pray it does so far away from the island, en route to Genoa,” said Giovanni Rum, 36, as he played with his nephews on the pier in the sunshine.

Shopkeeper Silvia said the residents are now looking forward to “waving farewell to the rusting hulk blighting our once pristine shoreline.”