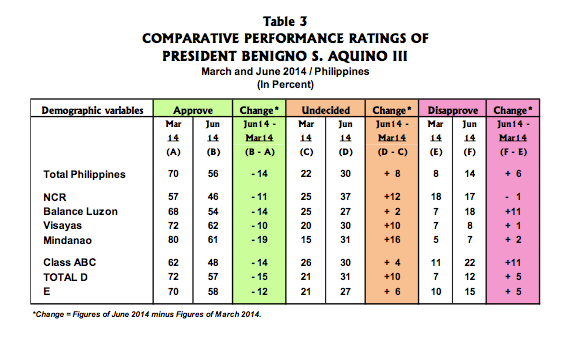 The poll, conducted among 1,200 respondents from June 24 to July 2, showed that Aquino’s approval rating dropped to 56 in June from 70 percent last March. Meanwhile, his trust ratings went down to 53 percent last month from 69 percent in March

“Various issues preoccupied Filipinos immediately prior to and during the conduct of the field interviews for this survey,” Pulse Asia said, enumerating issues that included the filing of plunder charges against lawmakers involved in the pork barrel scam, calls for the President’s impeachment, high-profile killings, the controversial decision of Aquino to reject Nora Aunor as National Artist and the SC decision on DAP.

In addition to the lower approval rating, disapproval of Aquino also increased to 14 percent from 8 percent three months ago. Indecision grew from 22 percent in March to 30 percent last month. 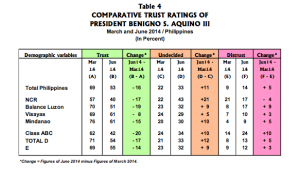 Aquino’s approval rating was highest in Visayas at 62 percent followed by Mindanao at 61 percent, although Mindanao also showed the largest decline by 19 percentage points.

Although all areas showed a decline in trust ratings, all except NCR (40 percent) still had a majority of respondents saying that they trust the President: 51 percent in Balance of Luzon, 61 percent in Visayas and 61 in Mindanao.