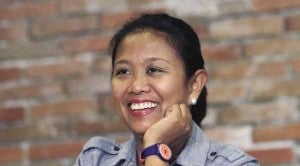 MANILA, Philippines–Despite having two of its prominent leaders detained on plunder charges, the United Nationalist Alliance (UNA) will not be hobbled in the 2016 presidential elections, where it will field Vice President Jejomar Binay as its standard-bearer, according to Sen. Nancy Binay.

Nancy acknowledged that the detention of Senators Juan Ponce Enrile and Jinggoy Estrada for allegedly pocketing pork barrel funds was a setback, but she did not think this would be completely detrimental to UNA in the coming electoral battle.

“For as long as my father (the Vice President) is doing his job, I think that would not have too much of an effect in 2016. I think, in 2016, the issue should be who can deliver the trickle-down effect of a good economy,” the senator said in a recent interview.

As to how UNA would handle the issue of graft and corruption in the campaign considering the plight of its allies, she said that Enrile and Estrada had not yet been convicted. The two senators have insisted they could defend themselves against the charges.

“We must assume they’re not yet guilty,” Binay said.

Despite the criminal charges, she said her father had no plans to distance himself from his political allies.

“That has never been our attitude, especially my father. He’s not the type who will leave a person when the latter is down,” she said.

The senator pointed out that when then President Joseph Estrada was ousted from Malacañang in 2001, her father stood by his beleaguered friend even if he also had close ties to the personalities involved in the movement to unseat Estrada.

Vice President Binay, who has long made known his plan to run for president, is expected to be UNA’s standard-bearer in 2016. He is one of its three top leaders, the others being Enrile and Joseph Estrada, now the Manila mayor.

Vice President Binay has yet to pick a running mate, saying that anyone was a possibility. Jinggoy Estrada is among those reportedly being considered as candidate for vice president.

UNA is one of the major political coalitions in the country, which went head-to-head with the administration coalition in last year’s midterm elections.

So far, the Vice President has been enjoying high approval ratings.

With only two years to go before the presidential elections, the political jockeying is expected to intensify.

Nancy Binay does not consider the brouhaha over the Disbursement Acceleration Program (DAP), which has subjected the Aquino administration to a lot of flak, to be a boon to the opposition.

“I don’t see it as a benefit or anything like that,” she said.

“It’s sad that we are undergoing such an issue now. It derails our focus. Instead of concentrating on how we can help improve the lives of Filipinos, we’re stuck with this PDAF (Priority Development Assistance Fund) and DAP,” she added.

The senator said the Aquino administration should prove its claim that the DAP had been beneficial to the country.

She said what was making things difficult was that nobody was owning up to the fact that a mistake was made.