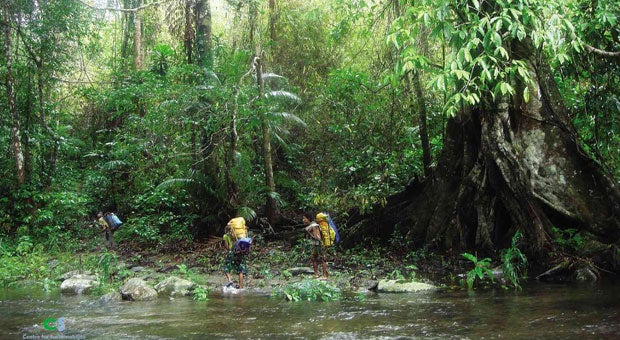 LAST FRONTIER Batak tribesmen guide wildlife experts on their trek to the peak of Mt. Cleopatra, part of an intact forest land sprawling over some 30,000 hectares on the northern edge of Puerto Princesa City in Palawan. Scientists and conservationists have called on the government to declare Cleopatra a national park because of its varied ecosystems and habitats for endangered and threatened species. JONAH VAN BEIJNEN/CONTRIBUTOR

PUERTO PRINCESA CITY, Philippines—For a biologist like Kyra Hoevenaars, who has lived and studied the wildlife and forests of Palawan province for years, Mount Cleopatra is a special place.

“Almost everything that you will find there, especially the mammals, they don’t exist anywhere else in the world,” Hoevenaars told the Inquirer.

One of the highest peaks on the island, Cleopatra has attracted the attention of the international conservation community, prompting US-based funding organization Rainforest Trust (formerly World Land Trust) recently to raise a fund pooled from private donations worldwide to encourage Philippine authorities and concerned groups to have it placed under formal protection by having it declared a national park.

In a post on its website, Rainforest Trust said it had “played a central role in the creation of 73 new protected areas in 20 countries while working with local organizations that empower indigenous people to steward their own resources” since its founding in 1988.

Last of the Batak

More than just being a biological gem that is worth preserving, the intact forest land sprawling over at least 30,000 hectares on the northern edge of Puerto Princesa City is also home to the last of the Batak tribe, an indigenous community of hunters and gatherers whose population has dwindled to just about 200.

“We started this initiative as an expressed desire of the Batak, who acted as our guides when we did several treks to Cleopatra’s Needle (the mountain’s peak, so called because it is narrow and elongated) to profile the place,” Hoevenaars said.

Last week, Rainforest Trust announced on its website that it had reached its target of $203,956 in donations to support biodiversity conservation efforts for Cleopatra.

The fundraising effort was started by a Palawan-based private group, Center for Sustainability, which did an initial biological assessment of Cleopatra and discovered its uniqueness.

Hoevenaars, executive director of the Center for Sustainability, said her group was pleased with the initial support it had received from local and national groups for the conservation initiative.

“We have received the support of the city government (Puerto Princesa), Protected Areas and Wildlife Bureau (now Biodiversity Management Bureau) of the Department of Environment and Natural Resources, Palawan Council for Sustainable Development, all the barangays (villages) around the targeted area and, most important, the Batak who live around Cleopatra,” she said.

The center said it aimed to get Cleopatra declared a protected area under local legislation, “then, [we hope], a national park under the Nipas (National Integrated Protected Areas System) law.”

Underlining the importance of Cleopatra, according to Hoevenaars, is its linking the vast expanse of the remaining forests of northern Palawan to the southern mountain ranges of the province.

In conservation science, linking patches of important ecosystems is key to ensuring the viability of the unique plants and animals that live there.

Having Cleopatra declared a protected area would link the mainland forest corridors of Palawan, including St. Paul mountains, where the famous Underground River is found.

The provincial government has announced plans to have more than 60,000 ha of remaining forests around the northern towns of Roxas, Taytay and San Vicente declared a protected area.

Palawan’s overall forest cover is the highest in the country, accounting for more than 40 percent of the island’s land area.

Considering that only about 3 percent of the Philippines’ original forests remains, Palawan is carrying the torch of forest conservation.

“Eighty-five percent of Palawan’s endemics are found on and around Cleopatra’s Needle. The lowland forests included in the proposed reserve are home to the last viable populations of several critically endangered species,” Rainforest Trust said.

“What makes Cleopatra interesting to science is its varied ecosystems—lowland, riverine, ultramafic and mossy and cloud forests on top. There’s an ample lot of knowledge useful to man that are waiting to be found,” Hoevenaars said.

(According to geology.com, ultramafic, or ultrabasic, refers to the igneous rock with very low silica content and rich in minerals such as hypersthene, augite and olivine.)

On a recent expedition to the summit that took three days of walking, Hoevernaars’ group rediscovered the Palawan toadlet, a rare species of frog that lives only on high-elevation mountains.

“We found the Palawan toad, which was previously thought to be extinct,” she said.

She said that because of the large number of creeks, waterfalls and rivers in perfect condition, the area played an important role in the survival of aquatic and semiaquatic species in Palawan, like freshwater turtles, amphibians and otters.

The region is also known to host endemic plants, including Cycad palm and pitcher plant species, found only on Cleopatra’s Needle.

Among the animals found only in Palawan and known to live on Cleopatra’s Needle is the Palawan birdwing, one of the world’s largest butterflies, with a wingspan of 20.32 centimeters.

“The southern and eastern hills of Cleopatra’s Needle are home to the last populations of the endangered Palawan horned frog and nearby creeks contain the largest remaining population of the threatened Philippine flat-headed frog,” Rainforest Trust said.

It said evidence suggested that the endangered Palawan toadlet could also be found on Cleopatra’s Needle, “although this has yet to be confirmed.”

Rainforest Trust said it continued to receive donations and had offered to match additional donations at a 1:3 ratio.

Shasha Maguad, legal officer of Environmental Legal Assistance Center, said her group “welcomed this plan, as this area has long been threatened although identified as [a key biodiversity area].”

“We hope that concerned government agencies will conduct consultations among [indigenous peoples] and other [concerned groups] to broaden interest and support,” she said.