Honesty is in her nature | Inquirer News
Close
menu
search

Honesty is in her nature 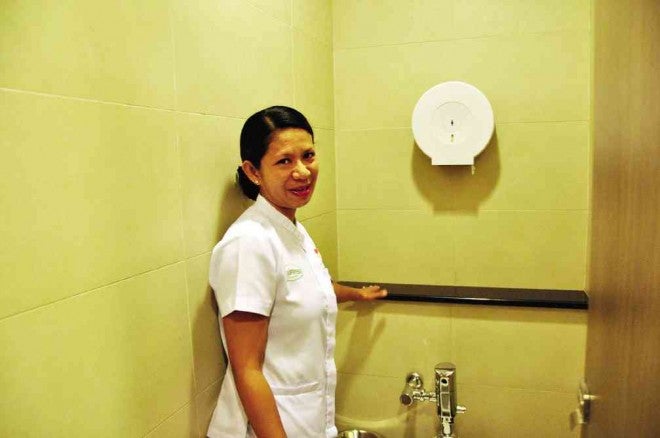 CEBU CITY—As a single mother to three children, Iris Melodia hardly makes ends meet with a monthly pay of P7,800 as a customer attendant at Ayala Center Cebu in Cebu City. An extra cash would have given her relief from her financial difficulties in paying for rent, utilities and food.

But when Melodia, 31, found a black translucent pouch on the counter of a comfort room cubicle at the customer’s lounge on the night of July 3, she didn’t think twice about what to do with its contents— P64,747 in cash and four checks worth a total of P750,222.99.

“What entered my mind was to return the money because it was not mine. I didn’t earn it,” she said.

For her honesty, Melodia may be nominated for the Customer Excellence Award, which is given every year to deserving employees, said Jeanette Japson, corporate communications manager of Cebu Holdings Inc., which owns and operates Ayala Center Cebu.

Melodia and her three children—Ivan, 14, Inah, 11, and Irene, 10—live in a rented room at a boarding house in Barangay Lahug, Cebu City. She spends for their food, bills and her children’s education.

She has been working as an attendant at the mall’s customer’s lounge for five months, and she has returned three items left behind by customers—a tablet and an iPhone she found on the couch, and the pouch. All items were claimed by their owners.

Melodia, who was hired through an agency, could have chosen to keep the pouch money and no one would know because no one else was in the toilet at that time. But she didn’t hesitate to turn over the pouch to Myra Jane Ruiz, who was then in charge of the customer’s lounge.

Ruiz recorded the item on the lost-and-found logbook. When no one came to claim the pouch until the mall closed at 9 p.m., Ruiz decided to hand it over to the head of the concierge desk, Jessavyl Monteza, who checked the contents.

As part of office procedure, Melodia said she and Monteza were advised to see the mall’s auditor, Hazel Yari, for another inspection. Aside from the cash and checks, which were placed in a vault for safekeeping, the two found a passbook, a checkbook and a rosary inside the pouch.

About 11 a.m. the next day, a woman in her 40s inquired at the customer’s lounge if anyone had found a pouch. Joan Calvo was brought to the concierge and was asked to describe the pouch and its contents.

When the descriptions matched those of the lost items, the pouch was released to her.

In a statement, Calvo said she offered a monetary reward to Melodia, but the employee turned it down.

“She just told me, ‘God bless you, Ma’am,’” Calvo said. “Her kind is very rare nowadays. She could have taken the money with the pouch and keep it, but she returned it instead.”

“I got her name and I just told myself that one day, I will be able to help her. I just really want to thank her and may God bless her too,” she added.

Despite her financial needs, Melodia said she declined the reward because it was enough for her to know that the pouch was returned to its owner.

Japson said the nomination for the award would have to undergo the usual screening and evaluation process. But Melodia said it was not necessary because she was merely following her parents who “taught me to be honest.”

Her father, Leonel Modequillo, a retired Army soldier, would always tell her and her three siblings to be honest. Her “training ground,” she said, was a retail store that her mother, Ofelia, once ran, and she didn’t steal a single centavo while tending it.

It is the same value that she lives by even if life is difficult. It is also the one she wishes to pass on to her children.