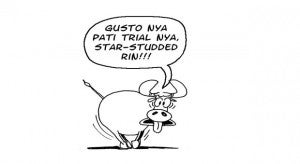 MANILA, Philippines–Sen. Bong Revilla is thinking of a defense in his plunder and graft case in the Sandiganbayan with an all-star cast.

The movie-actor-turned-politician informed the Sandiganbayan First Division on Wednesday that he planned to call President Aquino, a former President, a former Senate President, three Cabinet members and the heads of two constitutional bodies, as well as movie and television producers as witnesses in his defense.

Revilla did not tell the court what kind of testimony he hoped to get from his witnesses.

Aside from the President, Revilla planned to ask the court to subpoena former President and now Pampanga Rep. Gloria Macapagal-Arroyo, Interior Secretary Mar Roxas, Budget Secretary Butch Abad and representatives of the Department of Budget and Management, and Justice Secretary Leila de Lima and agents of the National Bureau of Investigation who investigated his case.

Revilla said he also planned to present the Senate President and the Senate finance committee chair during the years when he allegedly channeled his pork barrel funds into ghost projects proposed by Janet Lim-Napoles, the alleged brains behind the P10-billion pork barrel scam.

He said he also planned to call as witnesses the mayors who had been interviewed by government investigators.

Curiously, Revilla included among his witnesses GMA 7 network, where he has a show.

Revilla submitted his preliminary list of witnesses during the pretrial conference Wednesday.

According to court procedures, people subpoenaed by the court can refuse to serve as witnesses if they believe they do not have relevant information.

Revilla said he would present 264 documents to support his defense.

The Office of the Special Prosecutor also informed the Sandiganbayan Fifth Division that they would present accused-turned-state witness Ruby Tuason to show the government’s case against Estrada was strong.

They will also present representatives of various government agencies, including the COA, the NBI and the Securities and Exchange Commission, they said.

Among the documentary evidence to be presented are the special audit report of the COA, the special allotment release orders (Saros) from 2008 to 2009 and notices of cash allocation, they said.