Belmonte: Aquino should face nation to defend DAP in his Sona 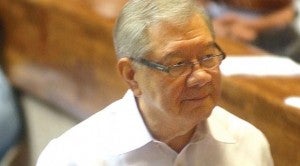 MANILA, Philippines–President Aquino should take the chance during his State of the Nation Address (Sona) to defuse the political firestorm unleashed by the Supreme Court decision striking down the Disbursement Acceleration Program (DAP), Speaker Feliciano Belmonte Jr. said on Tuesday.

Belmonte said Aquino was well within his right to defend the DAP and his decisions from its critics when he faces the nation on July 28.

“Yes, he should face them squarely,” Belmonte said in a text message to the Inquirer.

“The [DAP] did a lot of good things for the country. The constitutional parts are minor. The question of savings was in the General Appropriations Act, not in the Constitution, and could have been refined in the GAA,” he said.

But two lawmakers said it was better for Aquino to use the Sona to set the direction of his administration in its last two years, instead of addressing the highly divisive DAP issue, which has provoked attempts in Congress to impeach him.

“On this issue, whatever explanation you may give, you lose,” said Ifugao Rep. Teodoro Baguilat Jr. of the ruling Liberal Party.

“It’s good enough to say it was with good intentions that we did it. But to contest the Supreme Court decision, that’s tough. That’s why everybody’s saying ‘let’s accept it,’” he said in an interview.

For Valenzuela Rep. Sherwin Gatchalian, Aquino should address the DAP issue even before his Sona.

“This [DAP] is creating a lot of noise. This noise is not healthy for all of us,” said the member of the Nationalist People’s Coalition, who is being eyed as a senatorial candidate of the opposition United Nationalist Alliance in 2016.

Gatchalian said the Sona was meant “to steer the country where it should be in the next two years, and to lay down the direction for the country.”

“I don’t think it’s meant to defend yourself. It’s not meant to defend what you have done, considering also that the Supreme Court clearly said it’s not constitutional. I think it should be addressed prior to the Sona,” he said.

Last week, the high tribunal ruled that certain acts and practices under the DAP were unconstitutional, including the release of savings of the executive branch to other agencies, as well as the funding of projects not listed in the General Appropriations Act, or the national budget.

The court’s decision on the DAP has prompted the filing of at least two impeachment complaints against Aquino, but so far, no congressman has endorsed either complaint.

“That is a bad sign for those who are advocating the impeachment complaint against the President,” said Cavite Rep. Elpidio Barzaga Jr., another administration stalwart.

He said the Supreme Court conceded that the implementation of the DAP had yielded “undeniably positive results that enhanced the economic welfare of the country.”

“When it comes to grounds for impeachment, it must be a violation of such enormous gravity that brings light to the very heart, very life, very soul of the nation, and personally, I do not think the President committed such ground,” Barzaga said.

What about judiciary fund?

He also repeated earlier calls by administration allies that the Supreme Court must disclose how it was spending the Judiciary Development Fund (JDF), which had been described as the high tribunal’s version of pork barrel.

He said the Commission on Audit (COA) could do a special audit on the JDF. “If COA cannot do its job of conducting an audit on SC funds… COA chairs and commissioners under the Constitution are also impeachable.”

The Supreme Court on Monday said all the information on its disbursements were posted on its website, www.sc.judiciary.gov.ph.