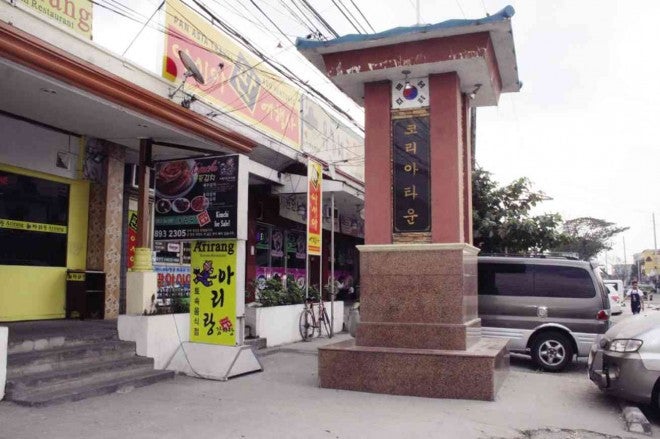 Korean Hyeog Jae-kwak, 51, a resident of Carmenville Subdivision in Cutcut village in Angeles City, was on his way home after withdrawing $20,000 from a bank in January when three men on a motorcycle fired successive shots at his sport utility vehicle (SUV).

The Korean lost control of the vehicle and slammed it into a concrete wall. One of the men approached him and shot him at close range then grabbed his bag containing the money.

The bank was located several kilometers from Hyeog’s house and the violent robbery happened at a busier time of the day, at 1:15 p.m.

Incidents like this are among the main concerns of some 20,000 Koreans in Angeles, and the number is still growing.

Kim Kwang-tae, former president of the Korean Community Association of Central Luzon, says crime is the primary concern of Koreans living in the city and other parts of the country.

“Many people in Korea think that the Philippines is not a safe place for them because they see in the news that Koreans are being killed here,” he says.

Last year, 10 Koreans were killed by criminals in different parts of the Philippines, Kim says.

“In Korean Town in Angeles City alone, there have been a number of shooting [incidents] and crimes against Koreans,” he says.

In April last year, a Korean businessman was killed while another was seriously wounded in Korean Town when a lone assailant shot them inside their van.

To combat the rising criminality in Korean Town, where around 150 Korean business establishments are found, Kim’s group hired 26 guards to secure the area.

Koreans are also wary about what they deem as slow processing of business permits.

He adds that his group has been addressing the general notion among Filipinos that Koreans are rude.

“They (Koreans) always shout at us and talk to us as if we are their slaves. They look down on us. They are bad-tempered,” says a Filipino cook, who used to work in a Korean shop in Angeles.

Some Filipinos who have dealt with Koreans share the same impression—that Koreans are ill-mannered.

But Kim says Filipinos and Koreans need to understand their respective cultures.

“In Korean tradition, it is not a virtue to speak in low voice and smile too much … . If you have worked with a Korean for a long time, maybe you will understand and accept such attitude without any problem,” he says.

To address the misunderstanding with Filipinos, Kim says KCA-CL has been educating its members about Filipino culture and traditions.

“We have been conducting seminars for Koreans, especially the businessmen, to educate them about the Philippines and its people. We tell them that they are not in Korea and they cannot always act as if they are in Korea,” he says.

Most of the Koreans in Angeles live at the Korean Town along the Philippine-American Friendship Highway and nearby areas like Cutcut. These areas used to be occupied by American military personnel, their families and dependents.

Kim says about 30 percent of the 1.2 million Koreans who visit the Philippines every year come to Angeles and the Clark Freeport.

He says more than 150 Korean-owned business establishments are in Korean Town and several more in other parts of Angeles. Inside the free port are about 50 Korean companies.

“Our association continues to educate the members about Philippine culture and laws. Many Koreans already know how to understand Filipinos and how to act if they are in the Philippines, ” he says.

“It will be good if Filipinos will also be educated about Korean culture so there will be mutual understanding,” he adds.