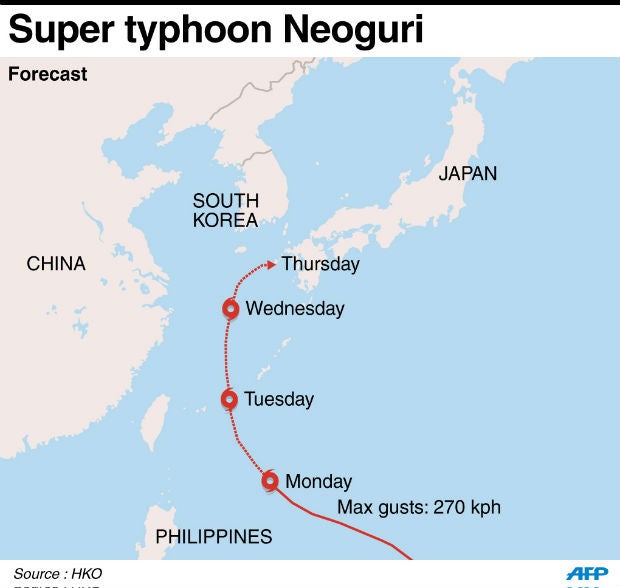 TOKYO–Japan was bracing Tuesday for one of its worst storms in over a decade as typhoon Neoguri barreled toward the southern Okinawa island chain, with 55,000 people urged to evacuate as the weather agency issued its highest alert.

The top-level warning means a threat to life, as well as the risk of massive damage from torrential rains and gusts of up to 250 kilometers (155 miles) per hour.

The Japan Meteorological Agency issued the alert for Okinawa’s main island, home to around 1.2 million people, as well as the outlying Miyako islands.

“We advised all 55,000 people in Miyako at 10:00 p.m. (1300 GMT Monday) to evacuate to facilities such as community centers and municipal buildings,” Miyako disaster official Katsuhiro Koja told AFP by telephone.

The Kadena Air Force Base, the biggest US Air Force base in the Pacific, located on Okinawa’s main island, evacuated some of its aircraft as officers stressed that Neoguri may be deadly.

Waves could reach as high as 14 meters (45 feet), a weather agency official said in a warning that was likely to revive memories of Japan’s quake-tsunami disaster in 2011.

The typhoon, which was downgraded from super typhoon status as it approached the islands Tuesday, was some 300 kilometers (190 miles) south southwest of the Kadena Air Force Base in Okinawa at 6 a.m. local time (2100 GMT Monday), according to the US Navy’s Joint Typhoon Warning Center.

The storm was moving north northwest at about 13 nautical miles (24 kilometers, 15 miles) per hour, it said.

“People are advised to refrain from going outdoors… evacuate if necessary before violent winds occur and take appropriate action to protect themselves,” he said.

The meteorological agency forecast Neoguri–whose name means “raccoon” in Korean–would dump up to 80 millimeters (three inches) of rain an hour on Okinawa as it pounds the archipelago.

The storm could affect an area with a 500-kilometer radius. The Kyushu region–next to the main island of Honshu, where major cities including Tokyo and Osaka are located–was already seeing heavy rain Monday, and officials warned of possible floods and landslides.

US officials at Kadena Air Force Base warned residents to take serious precautions.

“So be prepared!” Hecker said. “Tie down your outdoor items and work with your neighbors to help them.”

He added: “During the typhoon, do not go outside… anything not tied down, even small items, could become deadly projectiles.”

Okinawa is regularly hit by typhoons but islanders were taking no chances, with Miyako fishermen bringing boats back to port and tying them down.

“It’s rare that we brace for a typhoon (as early as) July,” one fisherman said.–Shigemi Sato