Abad yet to read SC ruling on DAP, claims he’s swamped with work 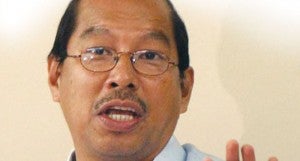 MANILA, Philippines — Budget Secretary Florencio Abad will respond to widespread and mounting calls for his resignation  after he has found time to read the Supreme Court decision declaring his “brainchild,” the Disbursement Acceleration Program (DAP), unconstitutional.

“We only got copies of the decision late last week. It is only this weekend that we can carefully read and analyze the decision and the concurring and dissenting opinions,” said Abad in a text message on Sunday night.

“We have been preoccupied with putting together the 2015 budget. In less than a week, we have to present the budget to the President and the Cabinet,” said Abad.

Asked if resignation was not an option, Abad replied: “Let me read the decision first.”

Associate Justice Arturo Brion was unequivocal on who he believed should take the fall for DAP’s blatant disregard of constitutional restrictions on the executive’s redeployment of funds already allocated by Congress in the annual budget.

In his 60-page separate and concurring opinion, Brion said:

“As a lawyer and with at least 12 years of experience behind him as a congressmen who was even the chair of the House appropriations committee, it is inconceivable that he did not know the illegality or unconstitutionality that tainted his brainchild. Armed with all this knowledge, it is not hard to believe that he can run circles around the budget and its processes, and did, in fact, purposely use this knowledge for the administration’s objective of gathering the very sizable funds collected under the DAP.”

Brion pointed out that Abad could not invoke “good faith” in implementing the maligned stimulus spending program as “there are indicators showing that the budget secretary might have established the DAP knowingly aware that it was tainted with unconstitutionality.”

In a news conference on Monday, on the last day of the Catholic Bishops’ Conference of the Philippines 109th plenary, Archbishop Socrates Villegas, the president of the 120-strong organization, was asked about impeachment moves against President Aquino in the House of Representatives.

“Will an impeachment process be helpful for the Philippines right now? Will [it] be helpful in alleviating the situation of the poor right now? Will it contribute to reaching out to the children and to the youth and for them to become more productive citizens in the future?” he said.

“So if this action of impeachment will promote the common good, then it is for those who are responsible to make a moral decision,” he said.

Sen. Miriam Defensor-Santiago was more blunt in calling for Abad’s head. “The Supreme Court said the DAP is wrong. Someone has to be made liable. Secretary Abad should resign to save the face of the President,” she said.

Fr. Joaquin Bernas, the country’s leading constitutional expert, wrote  in his opinion piece in the Inquirer that it would be implausible for both Abad and the President to claim they acted in good faith.

Bernas said: “By analogy, if the President and the budget secretary did not know that what they were doing was illegal and could not have reasonably known its illegality and only wanted to accelerate the movement of public money for the public good, they would be in good faith. Remember, however, that what is involved here is not just peanuts but billions and billions of pesos. How believable would the claim be that the President and the budget secretary, both veterans of Congress, had no inkling or the slightest suspicion of what the Constitution requires for handling public money?” With a report from Jocelyn R. Uy