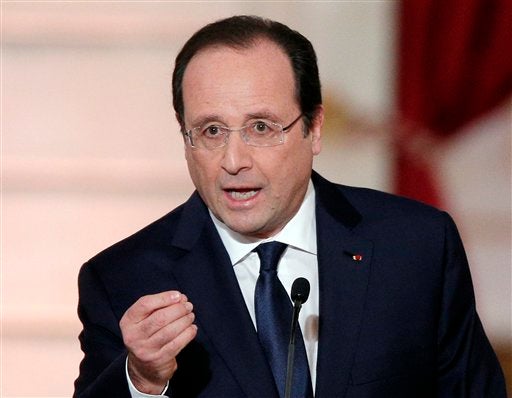 In this Tuesday, Jan. 14, 2014 file photo, French President Francois Hollande delivers his speech at his annual news conference, at the Elysee Palace in Paris. Authorities say the mother of a pupil at a French pre-school stabbed a teacher to death in front of her class Friday, July 4, 2014, the last day of the school year.   AP

PARIS— The mother of a pupil at a French pre-school stabbed a teacher to death in front of her class Friday, the last day of the school year, authorities said.

The education minister said the mother apparently had “serious psychiatric problems,” and pledged support for teachers in the face of angry or violent parents. Police said the mother was taken into custody.

Deadly attacks in a school are extremely rare in France, and the stabbing in front of a class of 5- and 6-year-olds raised concern at the highest levels. French President Francois Hollande expressed outrage at the attack at the Edouard Herriot school in Albi in southern France.

Education Minister Benoit Hamon traveled immediately to the school, and told reporters that the mother of a pupil “committed this abominable act in a class against a remarkable teacher.” A police official said the mother stabbed the teacher with a knife soon after school started Friday morning.

Hamon said the attacker’s child had been in the school only for a month and a half, and the mother had had very little contact with the school staff until Friday. It was unclear whether her 5-year-old daughter was in class at the time of the attack.

Police and city officials would not comment on possible reasons for the attack on Fabienne Terral-Calmès, 34. The slain teacher had two small daughters, Hamon said.

The regional prosecutor was expected to speak publicly about the case Friday evening.

After Friday’s attack, “the children were immediately taken in by another teacher who brought them to another classroom to talk to them, to tell them stories, to try to break them away from what they had just lived through,” Hamon said.

Marie-Odile Gay, a member of the regional health and safety committee for the Education Ministry, said the mother thought the teacher had called her daughter a thief, and that misperception might have played a role in the attack.

Gay said that the mother, 47, had received psychiatric counseling in the past, and had been accused by police earlier this year of abandoning her 15-year-old son.

Gay said the 5-year-old daughter had not had any difficulties in school, and was transferred Friday to the care of social services.

“This is something that will stay with her forever,” Gay said. “It’s very important to ensure that she is cared for.”

Some teachers complained that staff cuts have left teachers more vulnerable, and urged better attention to the tensions they face with some parents.

But fellow teacher Robert Couffignal of the regional teachers union insisted that the attack was an “isolated case” that had nothing to do with this particular school, and warned against going overboard with security measures as a result.

“Metal detectors at schools are not the answer,” he told The Associated Press by telephone. “We want to have close contact with the parents that creates a link of trust.”

He said the larger problem for schools in his region and around France is tension over economic decline and lack of job prospects for young people, especially those from poor or immigrant backgrounds.

The education minister lamented the especially painful timing of the attack.

“This July 4, the moment when we should be happy for all children that school is over, that vacations are beginning, that teachers successfully completed the school year, has been turned into a day of mourning … by this abominable crime,” Hamon said.

France still feels scars from a shooting at a Jewish school in Toulouse in southern France in 2012 that left three children and a rabbi dead.